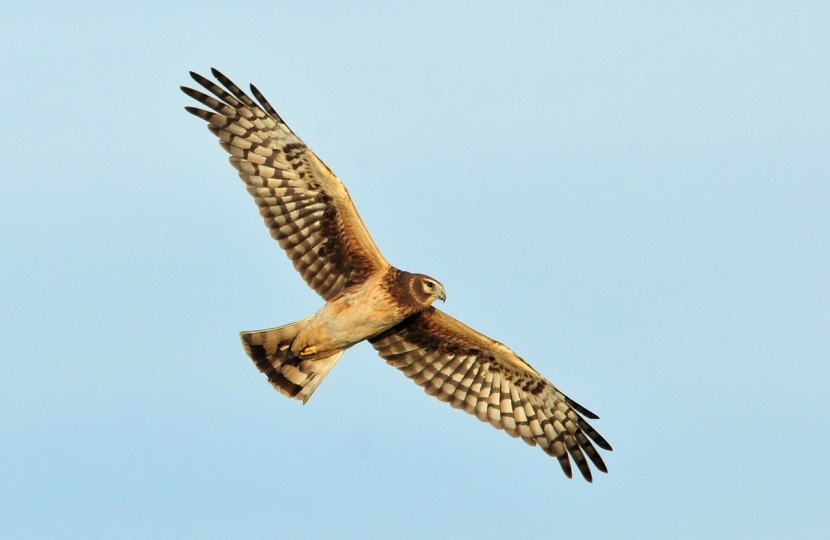 All wild birds are protected under the Wildlife and Countryside Act 1981 and there are strong penalties in place for offences committed against birds of prey and other wildlife, with most wildlife crimes carrying up to an unlimited fine and/or a six-month custodial sentence. To address concerns about illegal killing of birds of prey, senior Government and enforcement officers have identified raptor persecution as a national wildlife crime priority. The National Wildlife Crime Unit monitors and gathers intelligence on wildlife crime, including raptor persecution, and aids police forces in their investigations when required.

Ministers have always been clear of the need to phase out rotational burning of protected blanket bog to conserve these vulnerable habitats. Real progress is being made in promoting sustainable alternatives and I am pleased to hear that legislation is being looked at which could help achieve this. Ministers have also been encouraging landowners to adopt sustainable options and continue to work with them constructively. The England Peat Strategy will be published later this year which will detail further how we can protect, restore, and reduce damage to our peatlands.

A study in 2010 by the Game and Wildlife Conservation Trust showed that predator control resulted in significant increases in the breeding success of ground nesting birds such as curlew, golden plover and lapwing. Individuals should be free to manage wildlife within the law, and that the Government should only intervene when there is good reason to do so.  The Government will continue to work to ensure a sustainable, mutually beneficial relationship between shooting and conservation.

Last year was a record breeding season for hen harriers in England according to figures from Natural England. 2019 was a highly successful year for the iconic bird of prey in England, with a total of 15 nests producing 15 successful breeding pairs and 47 chicks – improving on the previous highpoint of 46 set in 2006.

The positive result means the last two years have produced 81 fledged chicks, surpassing the total for the previous five years put together (55). The chicks have also hatched in a wider variety of areas this year, including in Northumberland, Yorkshire Dales, Nidderdale, Derbyshire and Lancashire - leading to hopes that a corner has been turned in the restoration of the hen harrier population.

The introduction of a trial brood management scheme in 2018 through which landowners volunteered to test new methods to help reduce parent bird predation on grouse chicks has been welcomed as a positive development in efforts to improve hen harrier numbers.

The trial brood management scheme is a historic and vitally important part of the efforts being made to bring back hen harriers and we are hugely encouraged by progress to date. Grouse moor owners signing up to this trial was a key moment. Prior to its introduction in 2017 there were only three nests and 10 fledged chicks, we have now seen a 15-fold increase in the number of chicks over the past two years. There is a still a long way to go but we are on the right track.

A high proportion of the chicks have been fitted with satellite tags, which will allow Natural England to monitor the progress of the birds as they move away from their nest areas.

Brood management is part of a scientific trial to find another mechanism to reduce predation of grouse chicks. The hen harrier chicks have been released back into the locality from where they were collected once they were capable of fending for themselves.

Operation Owl, a national campaign working with the National Police Chiefs’ Council and police forces across England and Wales, is working to raise awareness of raptor persecution amongst the wider public and police officers. It aims to increased reporting of criminal activity against wildlife.

My Views on Animal Welfare