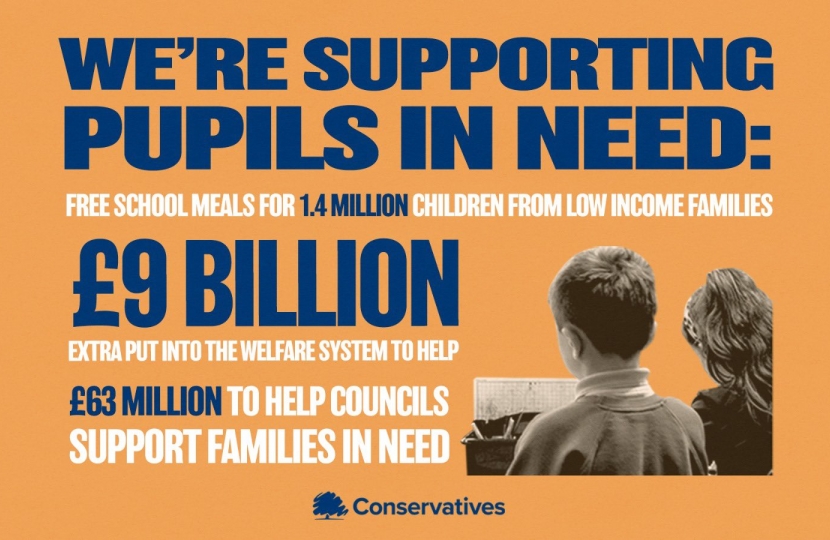 Since the Free School Meals Vote, the Government has announced a really positive package of Covid Winter Support, alongside a longer term plan to help the most disadvantaged kids through holiday activity clubs - a commitment from our 2019 manifesto.

Contrary to headlines within the media, this is not a "u-turn" on free school meals. Schools will not be providing free schools meals over the school holidays, as the Government are looking at a more targeted, local and effective mechanism of delivering support. Free school meals go to lots of people who may not need the help whilst missing out lots of those who do. So instead we're going to fund better targeted and more rounded support via local Councils. The Government voted against the FSM Vote, as we didn't want to just extend school responsibilities and make them part of the welfare system. Instead, local authorities who understand local need and the different groups that need support are best placed to ensure that appropriate support is provided. This £170m fund will not only make sure that no child goes hungry over Christmas, but also that a variety of different locally identified needs are catered for. It builds on the £63m previously allocated to Local Authorities to support groups who are helping people who are struggling to afford food and other essentials due to COVID-19.

The Covid Winter Support package is the Government's better and more generous approach to supporting families in need, instead of just ticking a box with an ineffective and badly targeted national scheme like Free School Meals (FSM). Essex County Council is receiving £3,838,050 from this fund and this support will not only help with food and bills, but will also offer more long term interventions to help people to move forward and to live independently. A more rounded social support rather than just free food, and genuinely targeted at those who need it rather than Labour's proposal to just tick a box in Westminster to say “we've done it”.

This is part of a long-term plan to help tackle health, hunger and education. The Holiday Activities and Food programme, which has provided healthy food and engaging activities to disadvantaged children since 2018, will be extended across England next year. Healthy Start scheme payments will increase from £3.10 to £4.25 from April 2021. Healthy Start supports lower-income pregnant women or families with children under the age of four to buy fresh fruit and vegetables, helping boost long-term health and education prospects. We're not just offering food, but supporting children with a package of much wider interventions to help in the long term.  The announcement of the Covid Winter Support Package builds on plans that have been in place for several years, like the Holiday Clubs, and isn’t simply a reactionary 'u-turn' that the media would have you believe it is.

I have not voted to take free school meals away from children- they will still receive meals during school time, in fact this Government has expanded the eligibility to more children than any other Government in over fifty years by offering a free school meal to every child in reception, Years 1 & 2, to those students from lower income eligible families in further education colleges and, most recently during the pandemic, to children of families on lower incomes with no recourse to public funds. I obviously don’t think that children should go hungry but instead I know that the Government has already provided assistance and over £9 Billion in funding to enable families to feed their children just as they do at the weekend when they are not in school.

Labour put forward a non-binding motion on extending free school meals outside school term time. If the Labour Party had won the vote it would not have resulted in any children getting free school meals in the holidays. The debate was an Opposition backbench debate without any coercive or executive power.  I opposed the non-binding motion as it was deliberately designed to create headlines and distract from what is actually an exceptional package this Government has put together to support people during the crisis.

In reality the Government has:

I would also add that when Labour were power when unemployment rose dramatically in 2009 and the unemployment rate was much higher 7.6% (currently at 4.5%), they did not supply such a generous package to families nor extend free meals during the school holidays.

The Conservatives extended free school meals over the summer holiday this year because most children had not been going to school since March and families had been meeting the extra costs of this. However right now, the situation is totally different, as almost all children are back in school and have been benefiting from free school meals during term as normal.

Free school meals during term time has been part of the education system for more than a century, but they have always been intended as additional support.  it is important to remember that free school meals are not a general welfare measure. They are aimed at providing healthy meals for children in school to ensure disadvantaged students can learn to the best of their ability. A wide range of financial and other support is already available to help families, such as the £9 million summer holiday activities and food programme. While schools play an integral role in their communities, it is not for schools to regularly provide food for pupils during the school holidays and the Government has boosted the welfare system to enable families to budget over the Christmas break.

Essex County Council is working with the Active Essex Foundation to extend its Holiday Hunger programme over this coming half term, which will see 33 programmes available across the county and more than 1,000 children provided with free activities and food. The Government gave funding to Essex County Council for these schemes before Wednesday's vote to support vulnerable families. In addition to the Holiday Hunger programme, Essex County Council has launched the ‘Half Term Emergency Fund’ a new scheme for foodbanks and other organisations which provides food to communities. Foodbanks will be able to apply for a grant up to £2,500 to help make sure they have enough supplies to cover the half term holiday. Find out more here.

A number of people have incorrectly commented that MP's have just voted to increase their pay. This is totally incorrect. Members of Parliament cannot vote on their Parliamentary salaries, nor do they have any control over how they are set. The Independent Parliamentary Standards Authority (IPSA) is responsible for deciding the salaries, expenses and parliamentary pensions.

IPSA have a statutory duty under the Parliamentary Standards Act 2009 to review MPs’ pay in the first year of each Parliament.  Currently this consultation is ongoing, it will close on 6 November 2020 and IPSA expect to make a decision in December 2020. I believe it is completely inappropriate for IPSA to suggest that MPs should have a pay rise during this time and would encourage anyone who feels the same to take part in IPSA's consultation: https://www.theipsa.org.uk/news/press-releases-2020/8-october-2020-periodic-adjustment-to-mps-pay-consultation/

Catering venues in the House of Commons serve many thousands of parliamentary pass holders of which MPs make up a small proportion. Other pass holders, all of whom can use catering outlets, include clerical and administrative staff, police and security officers, post office workers, cleaners and maintenance staff, journalists and reporters, as well as secretaries and researchers working for MPs and Peers.  Catering venues also serve thousands of visitors to Parliament every year.

Personally, I do not claim any permittable expenses for my own lunch or any other personal expenses. The only costs I claimed in the last session were my office admin costs, staff salaries and the travel & subsistence costs for local youngsters on work experience. I try to offer work experience in my Westminster Office to as many young people from Castle Point as I can, and I know that several of them have since gone on to get good jobs. I consider it only fair to reimburse these youngsters for their rail fare to London and their lunch.

Ben Bradley MP shared an excellent example to help explain why the Government's measures are designed to assist the families most in need:

"Here is a scenario to consider: Two friends, Steve and John.

Steve previously was on a low income and their child qualified for FSM. However they have done well at work and now earn £50,000 a year. That income has not been affected by COVID. His children still qualify for FSM, because having previously been on a low income that funding follows them throughout their time at school.

John is self-employed and previously earned £25,000 a year. Their children do not qualify for FSM. They have significant fixed costs like a mortgage and car repayments, but due to COVID they have been working limited hours and are now earning less than half of what they did before, meaning they are struggling to pay the bills etc.

If we just rolled out the Free School Meals proposals, Steve gets help despite earning a good income and not having experienced hardship due to COVID, whilst John who is really struggling on drastically reduced income gets nothing. It might sound good on the surface, but in truth it's not effective!

Through our approach, giving funding to local Councils to assess and administer the right support directly, we can ensure that John’s family who are really struggling get not just help with food, but other help and guidance to access personalised support too.

This is why Free School Meals is not a good mechanism to use. This is why Government has instead given money to local Councils, charities and community groups to offer help directly rather than a blanket national approach. This is why NOBODY voted against helping kids last week, we just voted to do it in a way that will reach more of those in need!!"