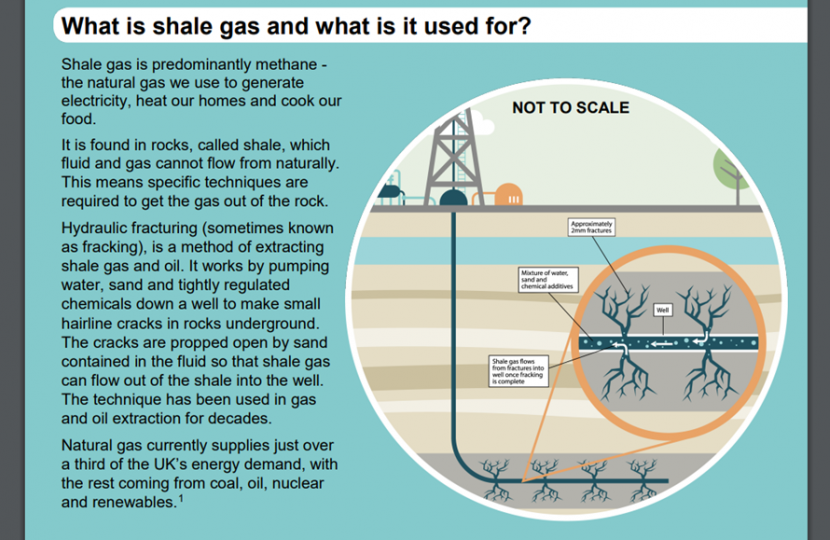 In line with the commitment made in the 2019 Conservative Manifesto, the Government will revert to a precautionary approach regarding hydraulic fracturing operations. The Government has confirmed that it is adopting a presumption against issuing any further hydraulic fracturing consents. This position, an effective moratorium, will be maintained until compelling new evidence is provided that addresses concerns around the prediction and management of induced seismicity.

The Government will be led by the evidence on whether, in future, this form of exploration can support UK energy security, emission reduction and be acceptable to local communities. For now, the Government is taking other measures to build energy security and affordability.

The Government also remains committed to Net Zero by 2050. The UK is a climate leader and is driving down demand for fossil fuels on the path to Net Zero.

As the Prime Minister set out when entering office, and in the House yesterday, the Government supports the core ambitions set out in the 2019 manifesto. The Government will therefore revert to a precautionary approach and only support shale gas exploration if it can be done in a way that is sustainable and protects local communities. We will be led by the evidence on whether this form of exploration can be done in a way which acceptably manages the risk to local communities.

In the November 2019 manifesto, the Government confirmed a moratorium on shale gas exploration in England with immediate effect. Having listened to local communities and assessed the state of the science we ruled out changes to the planning system. As set out in the manifesto, we will not support shale extraction unless the science shows categorically that it can be done safely.

In line with the British Geological Survey report on the scientific advances in hydraulic fracturing since 2019, forecasting the occurrence of large earthquakes and their expected magnitude owing to shale gas extraction remains a challenge with significant uncertainty.

The Government is confirming today that we will again take a presumption against issuing any further hydraulic fracturing consents. This position, an effective moratorium, will be maintained until compelling new evidence is provided which addresses the concerns around the prediction and management of induced seismicity. This is in line with the commitment made in the 2019 Conservative Manifesto.

While future applications for hydraulic fracturing consent will be considered on their own merits by the Secretary of State, in accordance with the law, shale gas developers should take the Government’s position into account when considering new developments.

November 2019: Government ends support for fracking in England on the basis of new scientific analysis

Fracking will not be allowed to proceed in England, the government has announced today, following the publication of new scientific analysis.

Ministers took the decision on the basis of a report by the Oil and Gas Authority (OGA), which found that it is not currently possible to accurately predict the probability or magnitude of earthquakes linked to fracking operations.

Fracking already takes place across the world including in the US, Canada and Argentina. However, exploratory work to determine whether shale could be a new domestic energy source, delivering benefits for our economy and energy security, has now been paused - unless and until further evidence is provided that it can be carried out safely here.

Ministers have always been clear that the exploration of England’s shale gas reserves could only proceed if the science shows that it is safe, sustainable and of minimal disturbance to those living and working nearby. For that reason, government introduced tight planning controls through the Infrastructure Act 2015 and set strict limits on seismicity, in consultation with industry.

On the basis of the disturbance caused to residents living near Cuadrilla’s Preston New Road site in Lancashire and this latest scientific analysis, the government has announced a moratorium on fracking until compelling new evidence is provided.

The government also confirmed today that it will not be taking forward proposed planning reforms for shale gas developments at this time. These proposals were consulted on in 2018 but will not be implemented now.

Whilst acknowledging the huge potential of UK shale gas to provide a bridge to a zero carbon future, I’ve also always been clear that shale gas exploration must be carried out safely. In the UK, we have been led by the best available scientific evidence, and closely regulated by the Oil and Gas Authority, one of the best regulators in the world.

After reviewing the OGA’s report into recent seismic activity at Preston New Road, it is clear that we cannot rule out future unacceptable impacts on the local community.

For this reason, I have concluded that we should put a moratorium on fracking in England with immediate effect.

Other sources of natural gas will continue to contribute to the UK’s diverse energy mix. The Committee on Climate Change has previously said that there will still be a requirement for natural gas in a 2050 net zero economy.

Maintaining diverse gas supplies, for use during the transition as the UK renewable sector grows – or for the production of hydrogen – remains a priority for this government.

The Committee on Climate Change’s advice is clear that natural gas will continue to have a key role to play as we eliminate our contribution to climate change by 2050, including for the production of hydrogen. However, following our action today, that gas will need to come from sources other than domestic fracking.

Today’s decision will not in any way impact our energy supply. The UK benefits from one of the most active gas markets in the world, with security ensured through diverse sources - including domestic offshore production, pipelines from Europe and liquid natural gas terminals.

The Traffic Light System was introduced in 2012 as an evidence-based method of regulating seismicity caused by shale gas exploration. It has operated at Preston New Road, allowing the OGA to swiftly put a halt to activity when required – including after several significant events this summer.

Since the OGA suspended hydraulic fracturing at Preston New Road we have been considering whether the operator’s plans are still appropriate to manage the risk of induced seismicity. The OGA’s considerations have been informed both by the seismic events and by independent scientific analysis of data from the first Preston New Road well.

Based on these, the OGA believes that further detailed geomechanical analysis would be needed before we could evaluate with confidence whether hydraulic fracturing could resume in the Fylde, or elsewhere, consistent with the government’s policy aims.