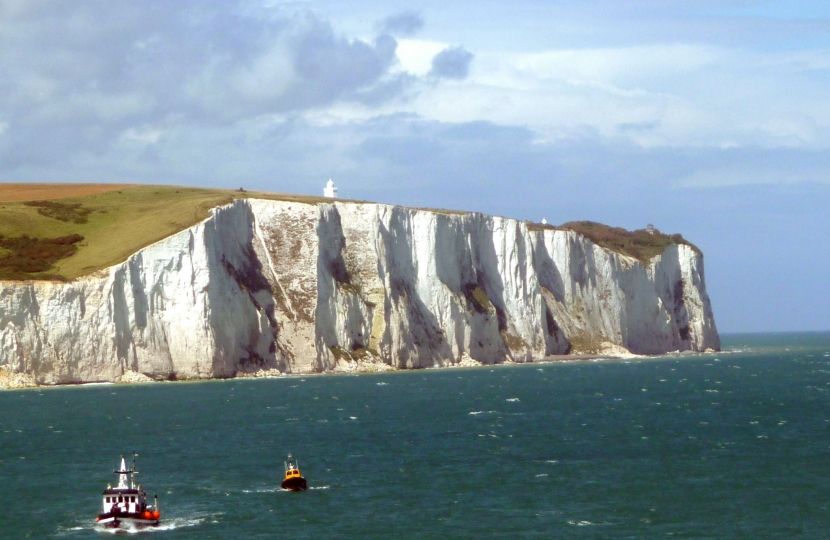 It is also true that those who have no right to remain in the UK are expected to leave voluntarily and should take all reasonable steps to do so. If they do not leave voluntarily I know that the authorities will seek to enforce their removal. More generally, the Government is in the process of building our future immigration system to benefit the needs and interests of all parts of the UK. I have always been clear that the UK’s new point-based immigration system must serve the national interest and lead to a reduction in migration.

I do, however, remain committed to an immigration policy which welcomes people to the UK through safe and legal routes. All illegal immigration should be deterred and prevented.

The Prime Minister has prioritised this issue since he took office: he has delivered the largest ever small boats deal with France which increases UK-funded patrols by 40%, re-established the Calais Group of Northern European nations to disrupt traffickers, and set a long-term ambition for a UK-EU wide agreement on migration. But we need to go much further. That is why the Prime Minister and Home Secretary are setting out five new steps:

However, the Government will go further still to solve this problem once and for all: early next year we will introduce new legislation to make it clear that if you enter the UK illegally you should not be able to remain – but should be swiftly detained and removed.

By taking these steps, we will be tough but fair, tackle illegal migration – and stop the boats.

For more information on the Government’s five new steps to tackle illegal migration and stop the boats, please visit: https://www.rebeccaharris.org/news/rebecca-harris-mp-welcomes-governments-five-new-steps-tackle-illegal-migration-and-stop-boats.

You can also view the Prime Minister’s full statement on illegal migration (13 December 2022) at: https://www.gov.uk/government/speeches/pm-statement-on-illegal-migration-13-december-2022.

The Government is introducing the Nationality and Borders Bill. The Bill is the cornerstone of our New Plan for Immigration, delivering the most comprehensive reform in decades to fix the broken asylum system.

The Bill will be firm but fair: fair to those in genuine need, but firm to those who break the rules.

The principles behind the Bill are simple. Access to the UK’s asylum system should be based on need, not on the ability to pay people smugglers; Illegal immigration should be prevented. Those with no right to be in the UK should be removed. Those in genuine need will be protected.

The case for change is overwhelming.

The system is broken. We stand by our moral and legal obligations to help innocent people fleeing cruelty from around the world. But the system must be a fair one. In 2019, UK asylum applications increased by 21% on the previous year to almost 36,000 – the highest number since the 2015/16 European ’migration crisis’. The current appeals system is too slow. As of May 2020, 32% of asylum appeals lodged in 2019 and 9% of appeals lodged in 2018 did not have a known outcome. Shockingly, the asylum system now costs over £1 billion a year to run.

The Bill – and the wider New Plan for Immigration – has three key objectives:

The introduction of the bill was preceded by a consultation, which the Government has carefully considered. The Government will publish its response in due course.

For more information on how the Nationality and Borders Bill will achieve this, please visit: https://www.rebeccaharris.org/news/nationality-and-borders-bill.

Changes to the Immigration Rules

Subject to the enactment of the Immigration and Social Security Co-ordination (EU Withdrawal) Bill, at the end of the Transition Period on 31 December we will end free movement and replace it with a new points-based immigration system for those of all nationalities (except Irish nationals) who want to come to work and study in the UK. The new system will be fairer, firmer and skills-led. It will align the treatment of EU and non-EU nationals and deliver for the whole of the United Kingdom. It will be open to applicants on most routes from 1 December 2020.

The new system will also require those applying via the skilled worker route to accrue points by meeting a number of relevant criteria, such as have a job offer at the appropriate skill level, the ability to speak English and meeting the salary threshold.

A robust and consistent approach to applying the UK criminality thresholds for the refusal of entry, permission to remain in the UK, deportation and exclusion, to EU and non-EU citizens, will be taken as part of the Points-Based System. Those seeking entry to the UK can be refused where they have: a conviction with a custodial sentence length of at least 12 months; committed an offence which caused serious harm; are a persistent offender who shows a particular disregard for the law; their character, conduct or associations means their presence is not conducive to the public good.

On 4 October 2020, at the Conservative Party Conference, the Home Secretary announced that she will bring forward legislation to deliver the biggest overhaul of our asylum system in decades. An asylum system should provide safe haven to those fleeing persecution, oppression or tyranny. But right now, ours enables an international criminal trade to elbow the most vulnerable to the side. After decades of inaction, we will introduce legislation to make our broken system fairer and firmer. Fair and compassionate towards those who need our help – welcoming people through safe and legal routes. Firm, by stopping the abuse of the system by those who come here illegally – sometimes via small boat, asylum shop and make endless vexatious claims to remain. Under Conservative leadership, the United Kingdom has and always will provide sanctuary when the lights are being switched off on people’s liberties.

How Will the System be Fixed?

We will introduce legislation to overhaul our current broken asylum system, ensuring it is compassionate towards those who need our help by welcoming people through safe and legal routes, but also stopping the exploitation of the broken system by those who come here illegally, asylum shop and make endless vexatious claims to remain.

We will accelerate our operational response to illegal migration, by using the full force of our National Crime Agency and intelligence agencies to hunt down the criminal gangs who traffic people into our country, making more immediate returns of those who come here illegally and break our rules, and exploring all other practical measures and options to deter illegal migration. We are urging the French to ensure that migrants who are caught attempting to reach the UK by boat are prevented from trying again, and are offering to work with them on joint exercises at sea to demonstrate how boats can be intercepted and returned safely.

An asylum system should provide safe haven to those fleeing persecution, oppression or tyranny. But right now, ours enables an international criminal trade to elbow the most vulnerable to the side. We will introduce legislation to make our broken system fairer and firmer. Fair and compassionate towards those who need our help – welcoming people through safe and legal routes. Firm, by stopping the abuse of the system by those who come here illegally – sometimes via small boat, asylum shop and make endless vexatious claims to remain.

The Government will deliver the biggest overhaul of our asylum system in decades, making it fairer and firmer. Efforts will be stepped up to stop illegal migration, delivering on the priorities of the British people. Additionally, a two-fold plan will be set up to stop small boats from leaving France in the first place, and intercepting and returning anyone attempting to make a crossing.

I entirely agree that that the number of illegal small boat crossings is unacceptable and the Government is committed to protecting UK borders and is actively cracking down on illegal immigration via the Channel. Many residents have contacted me about this and I have raised these concerns directly with the Home Secretary.

Due to the strengthened security at the French / UK border has meant it has become increasingly difficult for stowaways to illegally enter the UK in trucks and cars, which has led to more reckless attempts by boat. Those attempting to cross the Channel in small boats are putting their lives in grave danger and the ruthless criminals who facilitate crossings do not care about the risk to life.

This week the Home Secretary appointed a Clandestine Channel Threat Commander – a new role leading the UK’s response to tackling illegal attempts to reach the UK. Together with the and Minister for Immigration Compliance, Dan O’Mahoney will have the primary responsibility of making the Channel route unviable for small boat crossings. He will collaborate closely with the French to build on the joint work already underway, urgently exploring tougher action in France, including stronger enforcement measures and adopting interceptions at sea and the direct return of boats.

The National Crime Agency, Border Force and the Police have been engaging closely with the French authorities to crack down on the criminal gangs who facilitate these crossings and patrols on French beaches have been doubled.  A joint intelligence cell was established with France to crack down on gangs facilitating illegal crossings and people smuggling and last month joint investigations resulted in 11 more arrests. The Immigration Minister Chris Philp visited France demand stronger measures from French authorities, working with them to make the route unviable so migrants will have no incentive to come to northern France or attempt the crossing in the first place.

Those who make the perilous journey are medically checked, interviewed by immigration officers, and then held in immigration detention. I would like to reassure you that once the occupants of the boats arrive on our shores, they do not automatically receive the right to remain in the UK. I agree that France is a safe country with an established asylum system. It is correct that those coming across the Channel should claim asylum in the first safe country they reach. As the Prime Minister has stated “If you come illegally, you are an illegal migrant and, I'm afraid, the law will treat you as such”. The Government wants to return as many migrants who have arrived as possible, many have already been returned and there are further returns flights planned in the coming weeks.

Historically, providers have used contingency accommodation (hotels) during peaks in demand and the contracts allow for this. Contingency accommodation is used across several sectors as emergency accommodation. Serco, the company that manages the housing of asylum seekers, has used hotels but this is an emergency measure aimed to maintain social distancing, but this is only a temporary measure. The emphasis here is clearly to follow the guidance set by Public Health England, reduce infection and protect the NHS. Following the recent announcement anyone arriving from mainland France will have to carry out a mandatory 14-day quarantine, which will also help keep infection rates low. There is only one hotel in Castle Point, which is the Oysterfleet on Canvey and I believe we would all know about it if it was ever used for housing for Asylum Seekers. Local Councils do not pay any financial support to asylum seekers, their weekly cash allowance is £39.60.

On 22 October 2020, the Home Secretary laid before the House a Statement of Changes to the Immigration Rules.