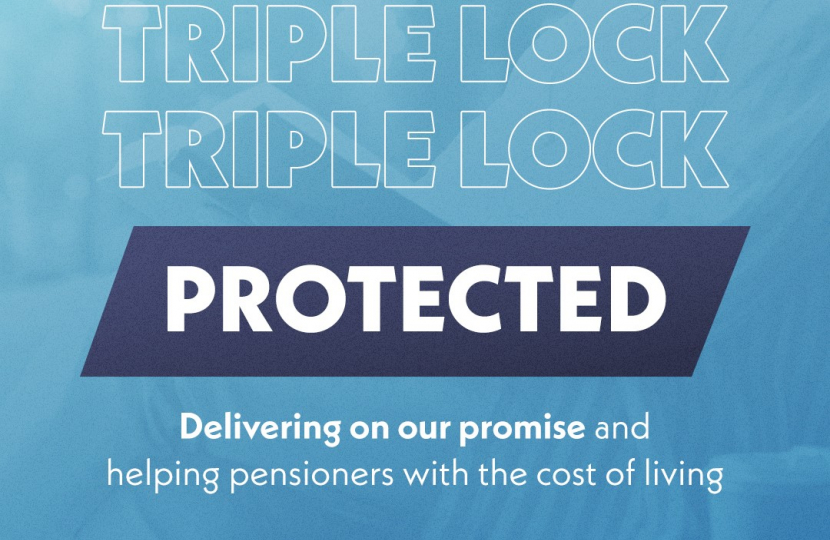 I was proud to support the introduction of the Triple Lock guarantee in 2011. This has led to the State Pension increasing by an average of 3% annually since. It is now worth £141.85 per week. The full rate of the new State Pension is £185.15 per week, up from £155.65 when it was introduced in 2016. There are also 200,000 fewer pensioners in absolute poverty – both before and after housing costs – than in 2009/10. The Government is proud of its record of support for pensioners and of the action we took last year to ensure that pensioners’ incomes continued to increase, despite falling earnings among working-age taxpayers.

Every year, the Secretary of State for Work and Pensions is required by law to review whether benefits have kept pace with inflation or earnings increases. The pandemic caused a statistical anomaly in average earnings. In 2020, the law changed for one year to increase State Pensions by 2.5%, when average earnings had fallen and price inflation increased by half a percentage point. If this action had not been taken, State Pensions would have been frozen. In 2021 the anomaly remained. For 2022/23 there was a move to a Double Lock for one year only. This means that the State Pension rose by 3.1% for 2022/23, in line with September 2021's inflation figure.

It was announced in October 2022 that the Triple Lock will apply as usual from next year for the remainder of this Parliament, in line with the manifesto commitment.

On top of this, pensioners continue to receive other support – free TV licences for those receiving pension credit, free bus passes, winter fuel payments and tax-free pension contributions worth over £50 billion.  For example, the Winter Fuel Payments will continue to be payable to customers of State Pension age. The Government will pay £200 to households with a customer aged between 66 and 79 and £300 to a household with someone aged 80 or over.

I welcome the Chancellor's announcement of new support to help older people. Pensioners in receipt of the Winter Fuel Payment will receive an extra £300 this year to help them cover the rising cost of energy this winter. Additionally, those on pension credit will be eligible to receive a £650 payment. Households will get £400 of support with their energy bills through an expansion of the Energy Bills Support Scheme. In addition to the Council Tax rebate announced in the Spring Statement, the support is worth up to £1,500.

Under the Energy Price Guarantee, a typical household will pay no more than £2,500 per year until April 2023. It comes in addition to the £400 Energy Bill Support Scheme and will support millions of people through a difficult winter and meaning they will not have to face bills of £6,000 this winter. In April, there will be a Treasury-led review into how energy bills are supported going forwards. The objective of the review is to design a new approach that will cost the taxpayer significantly less than planned whilst ensuring enough support for those in need.

Support with energy bills for low-income and vulnerable households is being provided through the Warm Home Discount, Winter Fuel Payments and Cold Weather Payments. Further information on these schemes can be found online at: https://www.gov.uk/bills-benefits.

You may also have heard of Pension Credit, which is an income-related benefit aimed at supporting pensioners on low incomes. Pension Credit provides a weekly top-up to your other income up to a standard minimum amount, depending upon how much other weekly income you have. Extra amounts are also payable in respect of disability, caring (including for children) and certain housing costs. There are around 1.5 million people already claiming Pension Credit, but I understand that estimates suggest that up to 1 million families who may be entitled did not claim the benefit. As it may be worth thousands of pounds a year to eligible households, I encourage you to use this online tool (https://www.gov.uk/pension-credit-calculator) to see if this is something you may be eligible for. An award of Pension Credit, even a small amount, can also act as a gateway to a range of other pensioner benefits, including help with rent and Council Tax, NHS costs and, for those over 75, a free TV licence.