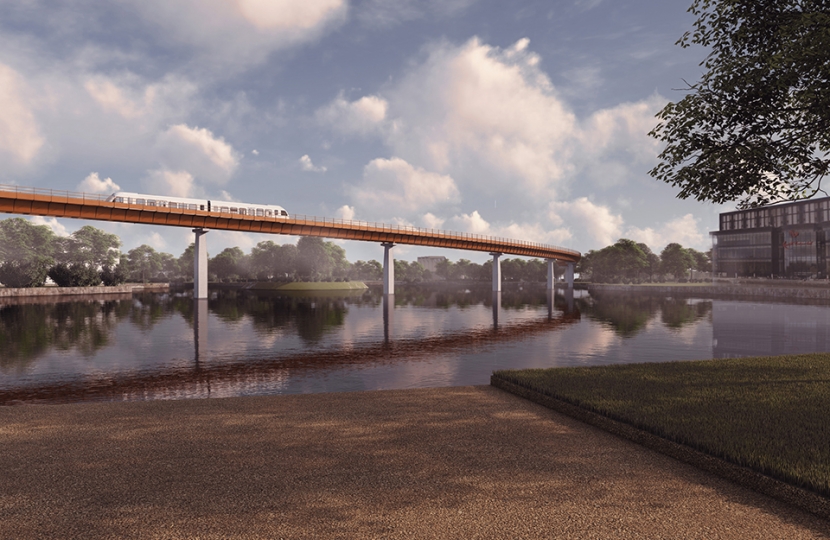 On the recommendation of the independent Oakervee review, on the benefits and impact of HS2, the Prime Minister gave the go ahead to HS2, alongside major improvements to local transport networks up and down the country. I welcome that, at a time when the construction sector faced uncertainty during the coronavirus outbreak, the Government’s subsequent decision to authorise ‘Notice to Proceed’ for Phase One provided certainty for construction companies, communities along the route, and the wider UK supply chain supporting this transformational project.

HS2 will form the backbone of the UK’s transport network, delivering a significant increase in rail capacity, with hundreds of thousands of extra seats. It will cut journey times, bring our biggest towns and cities closer together, enhance North-South connectivity, boost productivity in the Midlands and the North, and crucially it will help to spread prosperity more evenly across the country. .

Let me be clear that this is not an either / or decision between HS2 and improving the rest of the existing rail network, in particular local services in the Midlands and North. HS2 is in fact integral to giving the regions the fast connections they need. I have been reassured that Ministers will work hard to speed up the delivery of Northern Powerhouse Rail. More broadly, ‘High Speed North’ will be established to ensure an integrated, effectively sequenced plan to make sure the North and Midlands have the rail capacity and connections they need – east to west and north to south.

I am also particularly pleased about the Government’s determination to see a line drawn under the failures of HS2 Ltd.’s management, transparency and cost control to date. A dedicated Minister with specific responsibility for oversight and accountability of HS2 has been appointed and they will present regular reports to Parliament to enhance transparency.

The Department for Transport (DfT) has formally ordered the redesign of the HS2 terminus at Euston station, following recommendations made in the Oakervee Review in 2020. The review recommended that the station should be scaled back to provide a solution based around 10 HS2 platforms, a single stage build and increased oversite development, as the planned two-stage build would prolong the construction of the HS2 station, incurring further cost. I understand that all three recommendations made in the review have been worked into the redesign of the station. While being smaller than originally planned, the Department have assured that the redesigned HS2 station at Euston would not prevent the future operation of services on the HS2 Eastern Leg.

HS2 Ltd.’s role will also change. The complex Euston station element will become the responsibility of a new body, as will the design and construction of Phase 2b. This will enable HS2 Ltd to focus its energies on delivering Phases 1 and 2a successfully.

HS2 will play an important role in the UK’s transition to a net-zero carbon economy by 2050. I understand that HS2 will offer some of the lowest carbon emissions per passenger km, seven times less than passenger cars and 17 times less than domestic air travel in 2030. Indeed, HS2 is expected to help reduce the number of cars and lorries on the road and cut demand for domestic flights. It is estimated that the total carbon emissions produced by both constructing and operating Phase One for 120 years would be the same as just one month of the UK's road network.

I am also pleased that a green corridor will be created alongside the railway. This will involve the planting of seven million new trees and shrubs, including over 40 native species, along the Phase One route from London to the West Midlands. An overall £70 million funding package has also been made available to enhance community facilities, improve access to the countryside, and help improve road and cycle safety in towns and villages along the HS2 Phase One route.

There are approximately 52,000 ancient woodland sites across England, and of these, 43 will be affected by Phases One and 2a of HS2. It is worth noting that more than 80 per cent of the total area of these 43 sites will be untouched by HS2 and remain intact. I want to reassure you that HS2 is using a combination of approaches to compensate for the ancient woodlands lost during construction. This includes translocation of soil to other woodlands to improve their biodiversity, planting new woodland and restoring existing ancient woodland.

The HS2 Woodland Fund – overseen by the Forestry Commission – funds projects to support the creation, restoration and enhancement of woodland on private land or in partnership with multiple landowners. I understand that the Government has committed £7 million to establishing this Fund, and that the first £1.6 million for Phase One has already been allocated to supporting approximately 115 hectares of new native woodland creation, and the restoration of around 160 hectares of of plantations within ancient woodland sites.

HS2 Ltd and its contractors are obliged to comply with all relevant legislation on nesting birds. Indeed, all birds, as well as their nests and eggs, are protected under the Wildlife and Countryside Act 1981 (as amended) and all HS2 vegetation clearance is accompanied by measures to prevent any breach of the law. When habitat clearances need to be undertaken during bird nesting season, these clearances are carried out in accordance with guidance from trained ecologists, in line with Natural England guidance.

A Working Method Statement is completed before clearance work starts and appropriate ecological supervision is also provided. Work can also only commence when an ecologist has finished a pre-commencement site survey and given a Permit to Clear. All work needs to be monitored by the on-site ecologist, and the ecologist can halt works if necessary. Buffer Zones are implemented if breeding birds are present during works, to allow work to continue in the surrounding area.