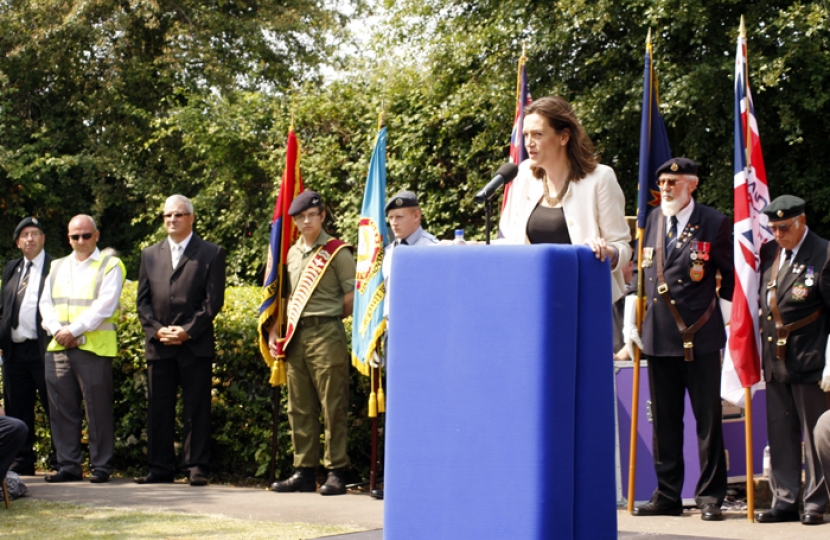 She was first elected as a Member of Parliament in 2010 with a majority of 7,600, and was re-elected in 2015, 2017 and 2019 respectively. Rebecca received 76.7% of the vote share in 2019 and boosted her majority to 26,634, beating her previous majority by 7,762 votes. Prior to the General Election in May 2015, Rebecca was named as the Member of Parliament with the 4th highest voting record in the country and has maintained one of the highest attendance ratings in Parliament since.

Rebecca has spent the majority of her working life in business, principally with Phillimore & Co who are specialist publishers of local British history and have published titles on Hadleigh, Thundersley, Canvey Island, and Daws Heath. At Phillimore, Rebecca started as a delivery driver and worked her way up through the company until she joined the Board as Marketing Director in 1997, a position she held until the sale of the firm in 2007.

Having been an employer, Rebecca believes that now more than ever, the House of Commons needs people with her sort of practical business experience. Through using her negotiation skills, she has achieved a cross party consensus on issues of local importance such as preventing Deans School from closing in 2014 and securing higher levels of Police funding.

Rebecca also has experience of local government having been a councillor for four years. She is strongly committed to "localism" believing that turnouts in local elections will be higher, and decisions will be better if local councils exert more power over the decisions that affect their residents. She has built and maintained effective relationships with local councillors, regardless of party affiliation, which facilitates great results for constituents on local issues.

Rebecca has successfully fought to save green belt sites in Castle Point from development.

Before being elected to represent Castle Point in 2010, Rebecca was the Political Special Adviser to the Shadow Secretary of State for the Department of Trade and Industry, Health, Education, Transport, and Environment respectively. She also worked as a Caseworker part-time in the House of Commons to get a “solid grounding in the role of an MP, a job for which there isn’t any formal training”.

Rebecca is a keen supporter of small businesses, from her background at Phillimore, and campaigned to make sure the Government was doing all it can to ensure support for small enterprise. One issue in particular that Rebecca campaigned on is Business Rates, and she frequently contributed to enquiries on this matter in her role as a member of the Business, Innovation and Skills Select Committee. Before the Autumn Statements and Budget days in 2013, Rebecca had correspondence with the Chancellor and was pleased to see him cap small business rates to 2% in December of that year.

Rebecca was a member of the All Party Parliamentary Group (APPG) for Visteon Pensioners, the co-chair of the APPG for Fuel Poverty and Energy Efficiency, and the Chair of the APPG for Brain Tumors. Following the tragic story of Danny Green, an 11 year old Canvey resident who died from a brain tumor, Rebecca campaigned for more funding for Brain Tumor Research and was very pleased in 2018 when the Department of Health and Social Care and Cancer Research UK pledged an additional £45 million for the cause.

In early 2018, Rebecca was delighted to be appointed as a Government Whip, a role which she continues to perform. As a long time Eurosceptic, Rebecca is currently working hard in the Whips Office to deliver the result of the 2016 Referendum, and represent her constituents of which 72.7 per cent (37,691 people) voted to end the UK’s membership of the EU.