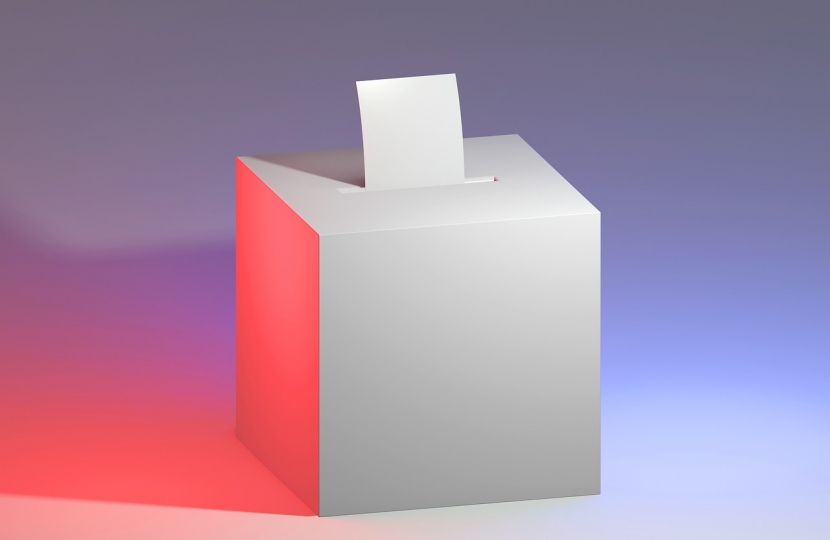 A commitment to introduce voter ID for UK Parliamentary elections and local elections in England was included in the Government’s manifesto in December 2019. I am therefore pleased that in the Queen’s Speech of 11 May 2021, the Government confirmed that an Electoral Integrity Bill is to be introduced in in the 2021-22 session of Parliament – which will mean that Electors will be required to show an approved form of photographic ID before casting their vote in a polling station across Great Britain at national UK-wide elections and local elections in England.

The Government is determined to strengthen the integrity of our electoral system and give the public confidence that our elections are modern, fair and secure. Every ballot matters in elections and voter ID will protect voters from having their vote stolen. Showing ID for services is an everyday activity, so proving who we are before we make a decision of huge importance at the ballot box should be no different. Vote stealing is not a victimless crime and voter ID is a responsible measure to protect people’s vote.

The Government does not want to create any barriers to anyone voting and take's seriously its responsibilities to ensure that all groups within society have full access to all of their democratic rights. The Government will continue to work with the Electoral Commission and other stakeholders, including the Equalities and Human Rights Commission and a wide range of charities and civil society organisations, to make sure that Voter ID is rolled out in a way that is inclusive for all eligible voters.

In pilot schemes in 2019 and 2018, the overwhelming majority of people cast their vote without a problem and the success of the pilots proves that this is a reasonable and proportionate measure to take, and there was no notable adverse effect on turnout.

Recent data shows that 99% of people from ethnic minority backgrounds had a form of ID that would be accepted under the proposals, as did 98 per cent of people who identify as white. A total of 99% of 18-29 year olds hold the relevant ID and 98% of those aged 70 and over do too. For the small percentage who do not possess a suitable photo ID with a recognisable picture, I would highlight that it is already a requirement for individuals to register to vote and confirming on the form that you need a voter ID is not a liberty issue, it's just enforcement of an existing law - which is voter fraud is illegal.

As legislation is brought forward to enable the national rollout of Voter ID, appropriate impact assessments will be provided for Parliament in the normal way. The details of the Bill will be published in due course.

What photographic ID will be used?

The list of approved photo ID will not be limited to UK passports or driving licences. A broad range of documents already in use will be accepted, these include:

Expired photographic identification will also be accepted if the photograph is of a good enough likeness to allow polling station staff to confirm the identity of the holder. New research published by the Government shows that 98% of electors already own a photographic document that is on the list of acceptable types of identification under this policy. Legislation will also make clear that local authorities must provide a Voter Card free of charge where an elector does not have one of the approved forms of photo identification.

What if an individual doesn’t have one of the required forms of photographic ID?

For any voter who does not have one of the required forms of photographic ID, a free, local Voter Card will be available from their local authority. Everyone eligible to vote will have the opportunity to do so.  A similar provision will be established for anonymous electors who will be able to apply for a free anonymous elector Voter Card should they wish to vote in person.

What about postal and proxy voting?

The Government does not have plans, as part of the national rollout of Voter ID, to require applicants to supply photo identification along with their application for a postal or proxy vote.

Has Voter ID been used in other countries?

Voter ID requirements exist in other countries, including Canada, Germany, India, Sweden and some US states. In some countries where you need a photographic ID to vote, such as the Netherlands, carrying one is always compulsory.

Closer to home, voters in Northern Ireland have produced ID at the polling station since 1985. Photographic ID has been required since 2002 (with electoral ID cards for those not in possession of any other form of photographic ID). There has been no evidence that the ID requirements in Northern Ireland have affected turnout and the allegations of ‘personation’, the crime of pretending to be someone else when you vote, have been eliminated.

Reports say that there is little evidence that electoral fraud takes place in the UK?

An independent review of electoral fraud conducted by Lord Pickles highlighted the events of cases such as Tower Hamlets - in which the 2014 Mayoral election was declared void by corrupt and illegal practices - as evidence of vulnerabilities in our system which must be addressed.

Personation - assuming the identity of another person with the intention to deceive - is very difficult to prove and prosecute but it is by no means a victimless crime. There are frequent anecdotal reports of personation, including most recently during the 2021 local elections. Often, it only comes to light if and when the real voter tries to vote later after the crime has been committed.

That is why voter identification is so important - it virtually eliminates the risk of it occurring in the first place. The perception that our electoral system is vulnerable to fraud is damaging for public confidence. Data from our pilot evaluations in 2018 and 2019 show that the requirement to show identification increased voter confidence in the process.

How will voters know about this in time?

It is vital that such an important policy is implemented properly and with sufficient time for voters and the electoral sector to understand the new requirements.

As is the case before any election, or change requirement for the public, a comprehensive communications campaign will advertise the requirements in plenty of time and across a broad range of channels before the policy is implemented nationwide.

It has been claimed that two million people won’t have the right to vote under these plans?

That’s not the case. Everyone who is entitled to vote must and will be able to. We have published research that shows that 98% of electors already own a photographic document that is on the broad list of acceptable types of identification, and the 2% that currently do not, would not equate to two million. Local authorities will be required, by law, to provide anyone without one of the wide range of accepted documents with a free, local Voter Card.

What about elderly people, are they less likely to have recognisable photo identification?

This is not what the research suggests, which draws on the most comprehensive available to date. It shows that 99% of 18-29 year olds hold the relevant identification, as do 98% of those aged 70 and above. Legislation will also make clear that local authorities must provide a Voter Card free of charge to anyone who does need it. We will continue to work with charities and civil society organisations, including those who advocate for older people, to ensure that voter identification will work for everybody.

What about disabled people, will this make it more difficult for them to participate?

Everyone who is entitled to vote must and will be able to. We will continue working constructively with charities and civil society organisations to help people understand these changes and make sure that everyone who is eligible to vote will be supported to do so. As well as steps to increase protections and tackle fraud, the Elections Bill also includes wider measures to make our polls more inclusive, such as: