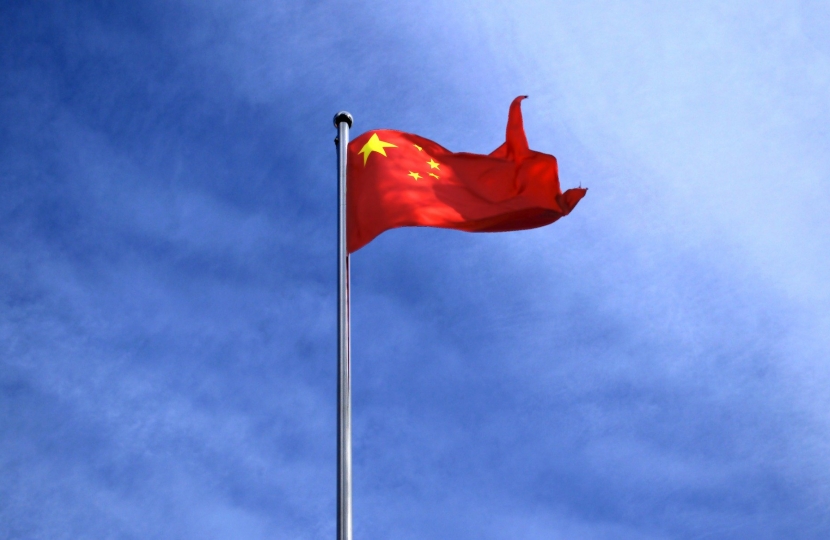 The UK seeks a positive, constructive, mature and reciprocal relationship with China, striving for good co-operation, but being honest and clear where we have to disagree. It is precisely because of China’s role in the world as a fellow member of the G20, and fellow permanent member of the United Nations Security Council, that we all expect China to live up to the international obligations and responsibilities that come with that stature.

The UK will also be frank where we have concerns, such as on the rights of the citizens of Hong Kong or on human rights violations in Tibet and against the Uyghurs in Xinjiang - and I welcome the robust action, bilateral and multilateral, the UK has taken on these issues so far.

I share the concerns about the appalling human rights situation in Xinjiang and the Chinese Government's deepening crackdown on Uyghur Muslims, including the extra-judicial detention of over a million Uyghur Muslims and other minorities in “political re-education camps” and reports of birth rate suppression.

The UK has played a leading international role in holding China to account for its human rights violations, leading joint statements at the UN’s human rights bodies, and underlining concerns directly to the Chinese authorities at senior levels. I know that the Government has repeatedly urged businesses involved in investing in Xinjiang or with parts of their supply chains in Xinjiang, to conduct appropriate due diligence to satisfy themselves that their activities do not support, or risk being seen to support, any human rights violations or abuses. This is advice I would strongly reiterate and urge all businesses in my constituency to consider.

It is welcome that this Government is prioritising standing up for those whose human rights are oppressed and I am encouraged by the international lead that the UK is taking to hold China to account on the international stage. In October, alongside Germany, the UK brought together a total of 39 countries in a joint statement at the UN General Assembly Third Committee and, in September, devoted the entire UK national statement at the UN Human Rights Council to China.

In light of the gross human rights violations being committed, there is more to be done, which is why, in September, the Home Secretary announced plans to strengthen the Modern Slavery Act 2015. I will be following these plans closely.

The Standing Committee of the National People’s Congress in Beijing adopted a wide-ranging National Security Law for Hong Kong in July 2020. This was a grave and deeply disturbing step. The UK Government carefully assessed the legislation and found that its enactment, imposed on the people of Hong Kong by Beijing, constitutes a clear and serious breach of the Sino-British Joint Declaration.

Signed in 1984 and still in effect today, the Joint Declaration made clear that Hong Kong’s high-degree of autonomy, rights and freedoms would remain unchanged for 50 years. As a result of the National Security Law and actions since – such as the imposition in November 2020 of new rules to disqualify pro-democracy lawmakers from membership of Hong Kong's Legislative Council, which has already seen four members being removed – this settlement is under threat. I am encouraged and indeed proud of the action the UK has taken in response.

The UK has directly relayed its concerns to China in the frankest terms possible, such as when the Permanent Under Secretary of the FCO summoned the Chinese Ambassador last July. As befits our historical commitment to the people of Hong Kong, the UK has also been working with allies to coordinate the international response, to call out the violation of rights and freedoms and to hold China to account. Last June, for instance, the UK was joined by twenty-seven other nations in making the first ever formal statement on this issue in the UN Human Rights Council expressing deep concern about the situation in Hong Kong.

I also welcome the three decisive steps taken unilaterally by the UK so far. Namely, extending the UK's arms embargo on mainland China to Hong Kong; suspending the UK's extradition treaty with Hong Kong; and introducing a new immigration path for British Nationals (Overseas) passport holders - BN(O)s. This final step, for which applications opened on 31 January, is very generous, giving the approximately three million people who qualify for BN(O) status unique rights to relocate to the UK if they believe that is right for them.

China is tarnishing its international reputation and undermining Hong Kong's long-term stability. It has not only breached its international obligations to the UK under the Joint Declaration, but its promises to the people of Hong Kong under its own laws. Be assured that I will be following this situation closely.

The UK ended its traditional bilateral aid programmes to China in 2011. Our relationship now focuses on cooperation to solve global issues such as climate change and public health. I am assured that the UK only collaborates with China where there is a clear national interest.