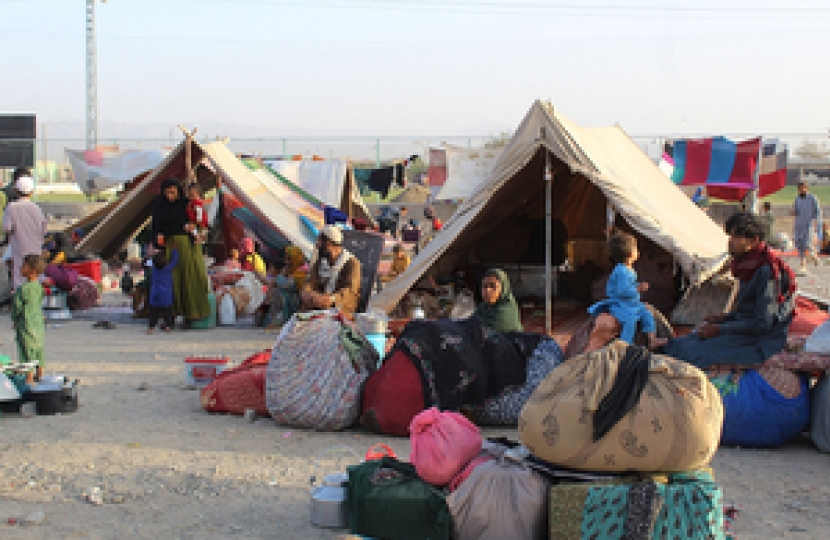 Afghanistan is facing a catastrophic humanitarian crisis. The United Kingdom has long been a leading provider of humanitarian aid to Afghans, both in Afghanistan and in the region. Over recent years the UK has been proud to be one of the leading contributors to the Afghanistan Humanitarian Fund. The UK will continue to work with our partners in this Council, in the Human Rights Council and most importantly in the region to deliver a more stable and inclusive Afghanistan for all of its people.

As a result of recent events within Afghanistan, the Prime Minister has agreed to the use of military support to facilitate the next phase of drawing down British Nationals from the country, including the use of RAF aircraft should it be needed. Prime Minister updated the House of Commons on our five-point plan to support the people of Afghanistan and contribute to regional stability by using every tool at our disposal and working with our international friends and allies.

The Government is working with our international partners to hold the Taliban to account on terrorism, human rights, and protections for women, girls, and minorities. The Government has made it clear that the Taliban must protect and uphold human rights, including those of women, girls, and minorities – and that they can expect to face sanctions or the suspension of Overseas Development Assistance if they commit human rights abuses or host terrorist organisations.

Operation Pitting will be commanded from the UK’s Permanent Joint Headquarters and is the name for military support to the evacuation of British Nationals and former British staff eligible for relocation under the Afghan Relocation and Assistance Policy (ARAP).  The Government is deploying 900 troops and civilian personnel to the region to provide support to Operation Pitting.

In parallel, Sir Laurie Bristow, the UK’s Ambassador to Afghanistan, continues to lead a small team in Afghanistan focused on providing consular and visa services for those applying for the UK’s relocation scheme. This team is helping remaining UK nationals to leave the country, and the continued rollout of the Afghan Relocations and Assistance Policy (ARAP), and working with international partners to support the Afghan Government.

UK troops will provide force protection and logistical support for the relocation of British nationals where required and assist with the acceleration of the Afghan Relocation and Assistance Policy (ARAP). This will help to make sure interpreters and other Afghan staff who risked their lives working alongside UK forces in Afghanistan can relocate to the UK as soon as possible.

ARAP, launched on 1 April 2021, is the most generous scheme of its kind in the world and has already supported over 3,100 former Afghan staff and their families to start new lives in the UK, with more than 1,800 of them arriving over the last few weeks alone. In the coming days, UK Government will further accelerate work on this scheme to ensure those who are eligible go through the necessary security checks and have the required documentation to travel to the UK.

We have significantly expanded and accelerated our dedicated resettlement scheme, deployed Home Office officials to help process British nationals for evacuation, and waived visas for their dependents.

We owe a debt of gratitude to all those who have worked with the United Kingdom to make Afghanistan a better place over the last twenty years. Many of them, particularly women, are now in urgent need of our help. That is why the Government is establishing a new route for Afghan citizens - prioritising women and girls - who have been forced to flee their homes or face threats of persecution from the Taliban to set up home in the UK permanently. This is in addition to existing programmes and routes already established and in operation.

The Government is hosting G7 summits to coordinate the international response, including a Foreign Minister’s summit ahead of a G7 Leader’s summit next week, doubling the amount of humanitarian assistance to Afghanistan to £286 million, creating a new legal routes for up to 20,000 Afghan refugees to be resettled in the UK (in addition to existing routes already in operation), and urging our allies to hold off on prematurely recognising any new regime and take a unified approach to Afghanistan.

The Government is delivering up to £30 million to neighbouring countries who are offering a safe haven to refugees to help provide shelter, sanitation and essential supplies – as part of the extra £286 million in aid we are committing to Afghanistan this year. This includes £10 million in immediate support for humanitarian partners to set up shelter and sanitation facilities on the Afghan border, and a further £20 million to help those facing greater demands for those displaced to provide essential services and supplies.

The Government is establishing the new Afghanistan Citizens’ Resettlement Scheme to resettle thousands of Afghan women and children under one of the most generous resettlement schemes in our country’s history. This new route is modelled on the successful Syrian Vulnerable Persons Resettlement Scheme, which resettled 20,000 Syrian refugees over a seven-year period from 2014 to 2021.

The Afghanistan Citizens’ Resettlement Scheme will prioritise women and girls, and religious and other minorities, who are most at risk of human rights abuses and dehumanising treatment by the Taliban. The UK is working with international partners to develop a system to identify those most at risk and resettle them, ensuring help goes to those that need it. The Government will work with the devolved administrations and local councils to ensure that Afghans who will be rebuilding their lives in the UK have the help they need and support to integrate.

This new route is in line with the Government’s New Plan for Immigration, which prioritises those most in need, and seeks to make the system fairer by protecting and supporting those in genuine need of asylum. The Government is clear that the new route will not compromise on national security and any person arriving on the route will have to pass the same strict security checks as those resettled through other schemes

The Government has also provided thousands of Afghans asylum in the UK and many Afghan nationals have come to the UK to work and study under the Points-Based Immigration System. The Home Office is accelerating the VISA process to allow the 35 Afghan Chevening Scholars to come to the UK to study.

Pen Farthing has said he is “so bloody happy” that his staff who worked at an animal shelter have made it out of Taliban-led Afghanistan. He tweeted that his Operation Ark campaign to get workers and animals from the Nowzad shelter in Kabul out of the country has been “a complete success”. Farthing added that Nowzad staff were “now safely in Islamabad and in the care of the British High Commission”. Farthing has also confirmed that he has seen pictures of the staff after their arrival and the smiles on their faces “just tells you everything you need to know”.

The Foreign Secretary also tweeted following the success evacuation of the Nowzad staff:

“Pleased that Nowzad’s Afghan staff, who were called for evacuation, successfully crossed the border into Pakistan today. Our [British High Commission in Pakistan] staff are assisting them and we look forward to welcoming them to the UK in the coming days.”

Dr Iain McGill, a vet on the plane back with Pen Farthing, which made a stop-off in another country before returning to the UK, said there were also between 90 to 100 dogs and 60 to 70 cats on the flight.

"The animals, considering what they've been through, are in very good shape on the whole"-  Dr McGill commented. He also said they had been checked and had gone to quarantine kennels, adding: "As you can imagine they're not short of homes for these animals".

Conservative MP Sara Britcliffe asked the Prime Minister in the House about Royal Marine Pen Farthing and his Nowzad charity’s veterinary staff and their immediate families, who now need safe passage back to the UK.

The Prime Minister agreed that we will be helping them:

"Like many of us, I have been lobbied extensively about the excellent work done by Mr Pen Farthing. I am well aware of his cause and all the wonderful things that he has done for animals in Afghanistan. I can tell my hon. Friend that we will do everything that we can to help Mr Pen Farthing and others who face particular difficulties, as he does—as I say, without in any way jeopardising our own national security. ". Boris Johnson

The Secretary of State for Defence has clarified that this claim by Mr Farthing was not true and has explained that he would not prioritise 'pets over people' when there were thousands of other desperate people waiting to leave. He stated:

“No one is blocking the charter flight. This is not about flights on the ground, and whether or not Pen can get on. If that aircraft flew in, it would block the airfield, it would sit there empty, because it's about getting as I said earlier the flow through the gate, through the barriers and into the airport and onto the aircraft.

“There's a confusion and I think I'm afraid some of the campaigners have latched onto the fact they've charted a plane is this somehow is the magic wand. The magic wand is whether people can get through Kabul, through the Taliban checkpoints, and then through the 3000 plus people waiting, some of whom are waiting in front of the queue, because they are under a real threat, direct threat right now from Taliban.

“His workforce have been offered, as entitled personnel, places and they will be able to be called forward, but I can't guarantee in this window they will be processed onto aircraft, all I can say is they qualify.

“As for the animals that he was rescuing... it is just not going to be the case that I will prioritise them over the men, women and children we see in desperate need at the gate.”

Helping Veterans of the Conflict

The veterans who served in Afghanistan fulfilled the first duty of the British armed forces – to keep our people safe – and the Government is committed to doing right by our veterans now that the conflict is over.

We will ensure no veteran’s request for help goes unanswered and continue to use every humanitarian and diplomatic lever to ensure the safe passage out of Afghanistan, safeguard human rights, and protect the gains made over the last two decades.