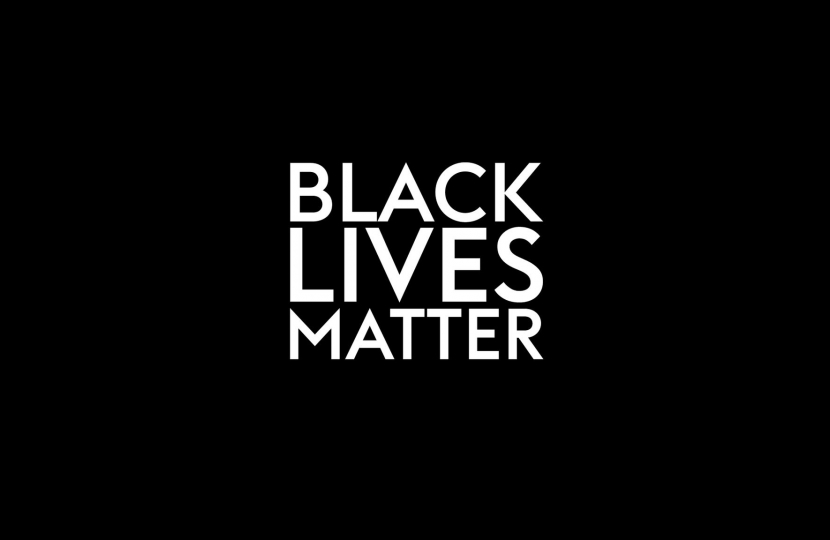 I have received many emails on the killing of George Floyd and the Black Lives Matter movement and would like to share with you my response to the many concerns that have been raised. Let me begin by categorically stating that racism and discrimination has no place in our society and that we must all work peacefully and lawfully together across all communities to tackle it.

I was incredibly distressed by the footage of what happened to George Floyd at the hands of the police in the US. In this country and around the world his dying words – I can’t breathe – have awakened an anger and a widespread and incontrovertible, undeniable feeling of injustice, a feeling that people from black and minority ethnic groups do face discrimination: in education, in employment, in the application of the criminal law. No one who cares about this country can ignore the many thousands of people who have joined the Black Lives Matter movement to protest peacefully, as most of them have, recently.

This country has made huge strides to tackle racism and inequality in its recent past – one small step being implementing the Modern Slavery Act to end the tragedy of modern day slavery. I truly believe that we are a much, much less racist society than we were – I remember the horror of the National Front in the 1970s. But we must also frankly acknowledge that there is so much more to do – in eradicating prejudice, and creating opportunity.

I, along with my colleagues in Parliament, took a minute’s silence last week in memory of the death of George Floyd. The time is now for action to tackle racism and inequality in society.

That is why I am pleased to see the announcement of a cross-governmental commission to look at all aspects of racial inequality – in employment, in health outcomes, in academic and all other walks of life. This is a hugely important step in tackling the racism and inequality that BAME communities face and I look forward to seeing its recommendations.

My responses to some of the further specific issues raised with me can be found below:

Use of force against protesters in the US

I have received many emails concerned about the force used against protesters by law enforcement in the US and the subsequent violence and rioting. This is obviously of great concern and I would urge all sides to de-escalate tensions. I am, however, pleased to see that in the main the protests in the UK have been peaceful. Let me assure you that the UK has a very different approach to policing than the US, with trust and legitimacy vital elements of policing by consent. Recent figures from the annual Crime Survey for England and Wales showed that 70 per cent of black people aged 16 and over in England and Wales said they had confidence in their local police. The Government is also very clear that disciplinary and criminal proceedings may follow any serious breach of the standards expected of police officers.

Coronavirus and its impact on BAME communities

Let me firstly assure you that the Government is looking into this issue as a matter of urgency. The Health Secretary commissioned Public Health England (PHE) to complete an urgent review on the disparities in risk and outcomes of the Covid-19 pandemic and has now published its findings (which can be found here). The report confirms that being black or from a minority ethnic background is a major risk factor, both in contracting the disease and, sadly, dying from it. This is undoubtedly of great concern and the Equalities Minister has reassured me that in the wake of the report, PHE has been commissioned to carry out further work to better understand the reasons for this disparity.

This report is a welcome first step, but has not yet gone far enough. I will continue to follow this issue extremely closely and provide further updates in due course.

Black history being taught in schools

I have also been contacted by many people about Black history being taught in schools. I believe it is vital for young people in this country to learn about Black history. I am therefore pleased that all schools have the freedom to teach it from primary school age onwards, as part of the history curriculum. I am aware that schools have flexibility over how they teach this subject and which resources to use from a range of organisations and sources, including the Black Curriculum if they choose.

I am also encouraged that the national curriculum provides a number of opportunities for pupils to be taught about different societies and how different groups have contributed to the development of Britain, and that this can include the voices and experience of Black people. This includes in history, but also in subjects such as English and citizenship.

The wealth of diversity across our country is something to be celebrated, so I am pleased that the national curriculum allows us to do exactly that.

The death of Shukri Yahye-Abdi

Several constituents have also contacted me about the tragic death of Shukri Yahye-Abdi. The death of Shukri was tragic and deeply distressing. My thoughts continue to be with her family and friends at this difficult time.

Many have raised concerns regarding the role of Greater Manchester Police (GMP) in this case. I welcome the fact that the Independent Office for Police Conduct (IOPC) had the opportunity to investigate GMP’s handling of the case. As the inquest is yet to finish though, it would not be appropriate for me to comment in detail regarding the IOPC investigation or the role of GMP. I do, however, understand that the IOPC report has been shared with Shukri Yahye-Abdi’s family.

I also understand the concerns about reports of bullying faced by Shukri at school. Bullying is absolutely unacceptable and should not be tolerated in our schools. All state schools in England are required to have a behaviour policy in place that includes measures to prevent all forms of bullying among pupils. While schools are free to develop their own anti-bullying strategies, they are held to account for their effectiveness by Ofsted. Schools also have an important role to play in promoting community cohesion and integration.

Ultimately, it is important that school leaders identify any bullying in our schools and work hard, with the support available, to stamp it out.

The death of Belly Mujinga

The death of Belly Mujinga was a tragedy. She was simply doing her job at Victoria station, helping those who needed to travel. The British Transport Police has, however, conducted a thorough review of the incident and decided not to prosecute. Their statement on this decision is as follows:

“We understand that the tragic death of Belly Mujinga has shocked many people and that the outcome of our investigation has raised questions.

We want to be clear on why we decided not to take any further action – based on key witness statements and having reviewed the CCTV footage, there is no evidence of anyone spitting in this incident. Senior detectives are confident that this incident did not lead to Belly Mujinga contracting Covid-19. This is because the man in the CCTV footage who detectives interviewed as part of the investigation had a negative antibody test result for Covid-19 in the time after the incident, therefore showing that he had never had the illness.  The man’s test did not relate to the BTP investigation – he was tested as part of his occupation and the test results were shared with us during the investigation. Having reviewed all the evidence, senior detectives are satisfied that the incident didn’t lead to Belly Mujinga’s death.

We have kept Belly’s family fully informed throughout the investigation and they will continue to be supported by specialist officers. Our thoughts remain with her family and we will continue to support them as they come to terms with the loss of their much-loved mother and wife.”

I do, however, understand that the British Transport Police have now invited the Crown Prosecution Service to conduct an independent review of the available evidence. I will closely follow any developments and welcome the fact that the CPS will now have the opportunity to review this case.