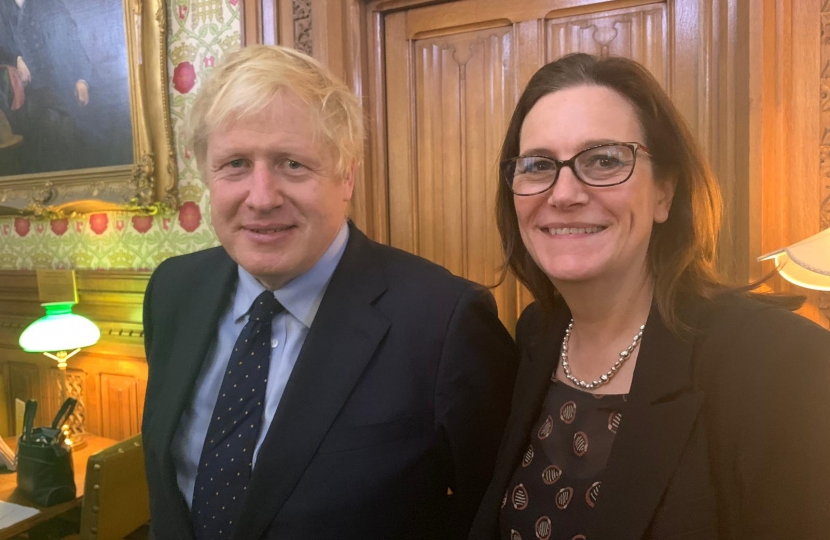 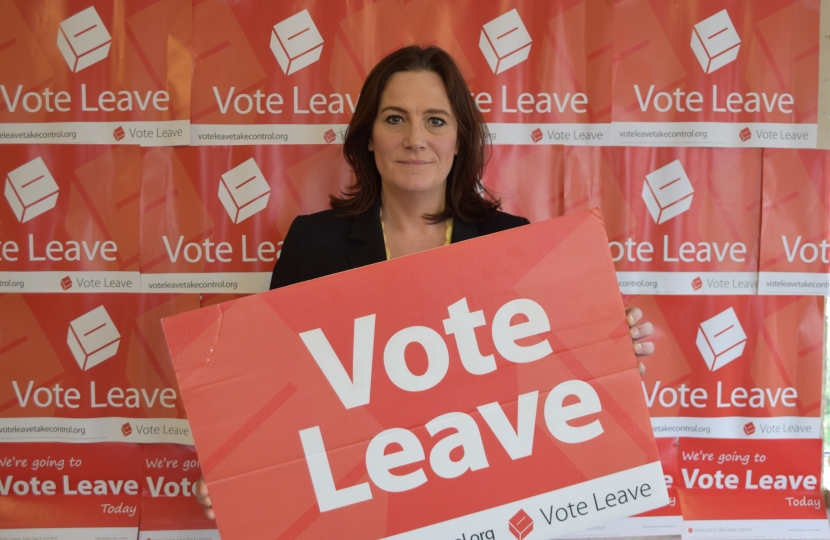 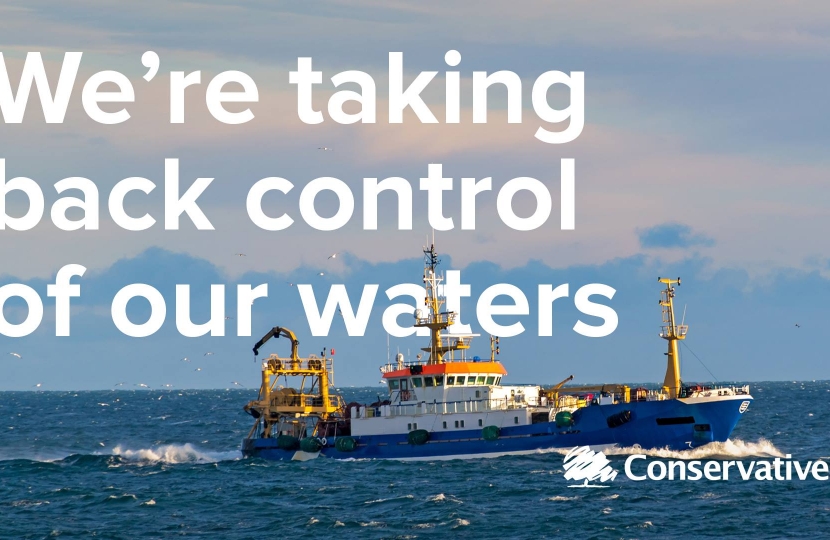 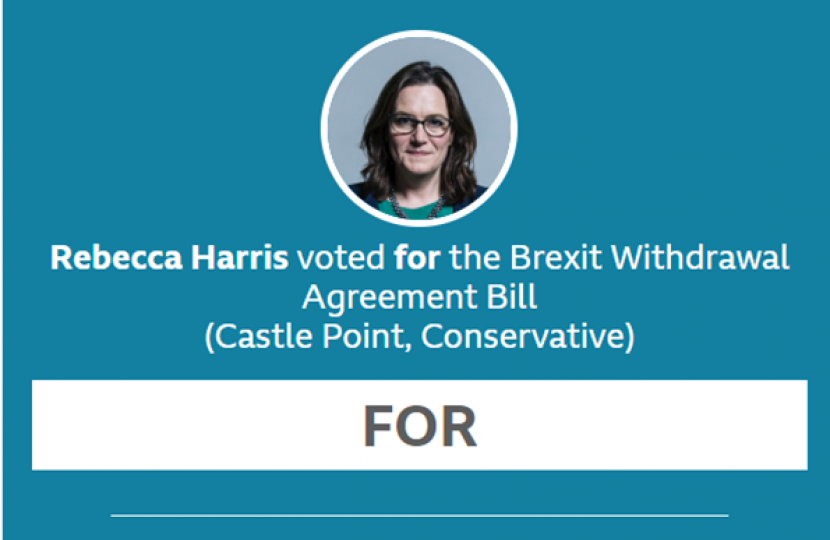 I campaigned for VOTE LEAVE in the 2016 referendum. My reason for wanting to leave the EU was simple, I believe that the laws which govern our lives, the decisions which effect each and every one of us, and the taxes that we must all pay should be decided here in this country, not in Brussels.

Wanting to leave the institution of the EU does not mean being anti-Europe. By leaving the EU we can reclaim so many of the things we have lost while strengthening our links to the rest of the world. One of the messages that I heard on the doorstep during the referendum campaign was clear; the UK must regain its sovereignty.

Supporting Brexit in the House of Commons

In 2016, Castle Point was the third highest leave voting constituency in the country, and I am clear I have a duty to represent this opinion in Parliament. I have long held the view that we should leave the European Union and have been working hard in Parliament to ensure that this happens, and the referendum result is honoured.

Since the Referendum, I voted to trigger Article 50, I voted for the European Withdrawal Bill, and I voted for numerous other bills that pave the way for Brexit. I also voted to keep NO DEAL on the table because it is better than a bad deal that would not deliver a true Brexit. Furthermore, the no deal opinion is an important negotiating tool for getting the best possible deal.

On every occasion that a Deal to LEAVE the EU has been put to Parliament by the Prime Minister. Time and time again the democratic will of the British people has been thwarted by opposition MPs in the House of Commons.

Despite all the doubters, Boris Johnson negotiated a new deal with Brussels. I backed the PM’s deal because it gives us back control of our borders, control of our laws, and means we can make future trade deals with the EU and other countries. It provides the basis of a new relationship with the EU based on free trade and friendly cooperation and it prevents a hard border with Ireland without undermining our union.

For the first time this Brexit deal won a majority in the House of Commons. Shamefully, on the very next vote the opposition parties voted against the timetable for debating and passing the necessary legislation. Without an agreed timetable, basically Jeremy Corbyn, the Lib-Dems and the SNP could have gone on forever debating it, amending it completely and even voting a second referendum into law. It is clear the other parties do not want to deliver anything close to a genuine Brexit and are simply just trying to overturn the democratic result of the referendum whichever way they can.

After we leave the EU, I would like to see a fair Australian-style points-based system that will allow us to bring in the talent we need and keep the criminals out.

Rebecca’s voting record on Brexit in the House of Commons

June 2015:  Voted FOR a referendum on the UK's membership of the EU (European Union Referendum Bill)

On June 23rd 2016 referendum: Rebecca voted to LEAVE the EU.

29th January 2019:  Voted AGAINST Labour's amendment for Parliament to vote on options which prevent the UK leaving the EU without a deal, including a permanent customs union and a referendum.

AGAINST The SNP's amendment to delay Brexit, rule out leaving the EU without a deal and emphasise the role of the UK nations in the Brexit process.

AGAINST MP Dominic Grieve's amendment to force the government to make time for six days of debate on Brexit alternatives before 26 March.

AGAINST Labour MP Yvette Cooper's amendment to give Parliament time to pass a bill that would postpone Brexit until 31 December if the prime minister's deal is not approved by 26 February.

AGAINST Labour MP Rachel Reeves' amendment for the government to ask the EU to postpone Brexit for an indefinite period.

AGAINST Tory MP Dame Caroline Spelman's amendment to reject leaving the EU without a deal.

AGAINST SNP's amendment to postpone the Brexit date by at least three months.

27th February 2019: Voted AGAINST Labour's amendment to back the party's proposals on Brexit, which include a customs union and a close relationship with the single market.

AGAINST SNP and Plaid's amendment to insist that the UK should never leave the EU without a deal.

FOR Yvette Cooper's amendment re-stating Theresa May's commitment that MPs should have a vote on delaying Brexit if both her deal and no-deal are rejected by MPs. (Amendment passed)

13th March 2019: Voted AGAINST the motion ruling out a no-deal Brexit.

AGAINST Cooper amendment ruling out no-deal Brexit at any time.

AGAINST Cross-party remainers amendment to request an extension of Article 50 in order to have another referendum.

25th March 2019: Voted AGAINST MP Sir Oliver Letwin's and MP Hilary Benn's amendment to allow MPs to take control of Commons business and put forward their own motions relating to Brexit - most likely a series of votes on the next steps. (Amendment passed)

AGAINST Labour MP Dame Margaret Beckett's amendment to allow MPs a vote on a no-deal Brexit or to request an extension, should the UK come within seven days of leaving the EU without a deal. (Amendment failed)

FOR No-deal: Leaving the EU on 12 April without a deal.

AGAINST Common Market 2.0: Remaining in the European single market and seeking a temporary customs union with the EU

AGAINST EFTA and EEA: Remaining in the European single market but not forming a customs union with the EU

AGAINST Labour's alternative plan: Negotiating changes to the withdrawal agreement so that it includes a permanent customs union, and close alignment to the single market (Jeremy Corbyn's proposal & protections to workers' rights.

AGAINST Revoking Article 50: Cancelling Brexit if the UK gets within days of leaving the EU without a deal

AGAINST a second referendum:  Holding a public vote to confirm any withdrawal agreement agreed by Parliament

FOR Standstill arrangement: Seeking a tariff-free trade agreement with the EU that will last for two years.

29th March 2019: voted FOR the revised version of the withdrawal agreement to Leave the EU.

AGAINST Common Market 2.0: Remaining in the European single market and seeking a temporary customs union with the EU.

AGAINST a second referendum.

AGAINST blocking leaving with no-deal by cancelling Brexit if EU won’t grant a further extension beyond 12 April.

3rd April 2019: Voted AGAINST the Cooper bill, (a bill to give MPs the power to compel Theresa May to seek a delay to Brexit).

September 2019: Voted AGAINST the bill aimed at blocking a no-deal Brexit (the “Benn Act” forces the PM to ask for an extension beyond the 31 October Brexit deadline if a deal has not been agreed with the EU)

FOR the motion to hold an early general election

19th October 2019 Voted AGAINST the Letwin amendment (an amendment to withhold approval of the deal, until the legislation to enact it was safely passed - a move that would automatically trigger the "Benn Act" and force the prime minister to request a further postponement of Brexit until 31 January.)

FOR The proposed timetable to get the Withdrawal Agreement Bill through the House of Commons by the end of the week (so we could LEAVE the EU by 31st October).