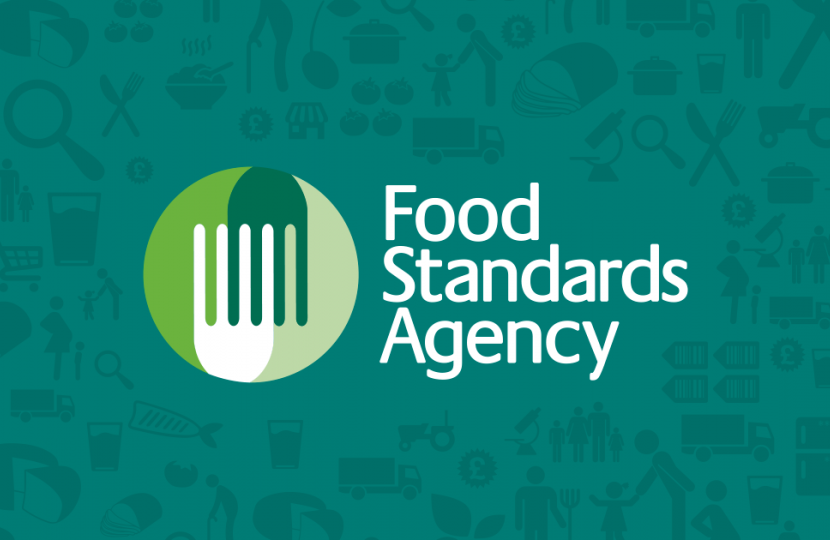 Our manifesto is clear that in all of our trade negotiations, we will not compromise on our high environmental protection, animal welfare and food standards. The Government are not planning to negotiate trade deals that harm farmers and consumers. Suggesting otherwise is entirely misleading. We remain firmly committed to upholding our high environmental, food safety and animal welfare standards outside the EU and the EU Withdrawal Act will transfer all existing EU food safety provisions, including existing import requirements, onto the UK statute book.

The Agriculture Bill will allow the UK to introduce ambitious new land management schemes in England, based on the principle of public money for public goods. This means that farmers and land managers who protect our environment, improve animal welfare and produce high quality food in a more sustainable way can be rewarded.

British consumers want high welfare produce and if our trading partners want to break into the UK market, they should expect to meet those standards. The Government will not compromise on our standards of food. The EU Withdrawal Act will transfer all existing EU food safety provisions, including existing import requirements which prohibit the chlorine-washing of chicken carcases, onto the UK statute book. All food coming into this country will be required to meet existing import requirements. These import standards include a ban on using artificial growth hormones in domestic and imported products and set out that no products, other than potable water, are approved to decontaminate poultry carcases. Any changes to existing food safety legislation would require new legislation to be brought before this Parliament.

The UK’s food standards, for both domestic production and imports, are overseen by the Food Standards Agency and Food Standards Scotland. These are independent agencies and provide advice to the UK and Scottish governments. They will continue to do so in order to ensure that all food imports comply with the UK’s high safety standards. Decisions on these standards are a matter for the UK and will be made separately from any trade agreement.

It is welcome that a Trade and Agriculture Commission has now been launched. The commission will ensure that the voices of the public and industry are heard, and that their interests are advanced and protected. It will advise the Government on how Britain can remain a world-leader in animal welfare and environmental standards, and how we can seize new export opportunities for our farmers.

Finally, I am pleased that the Government are already engaging with the agricultural sector as part of its trade discussions, including the National Farmers Union. It is encouraging that Ministers share my determination to ensure our future trade agreements will deliver benefits for our brilliant farmers and food producers. All parts of the UK should be proud of our world-leading food, health and animal welfare standards and we will not lower our standards as we negotiate new trade deals.

Food and farming is a bedrock of our economy and environment, generating £112 billion a year and helping shape some of our finest habitats and landscapes. The Agriculture Bill will provide a boost to the industry after years of inefficient and overly bureaucratic policy dictated to farmers by the EU.

Our landmark Agriculture Bill will transform British farming, enabling a balance between food production and the environment which will safeguard our countryside and farming communities for the future. This is one of the most important environmental reforms for many years, rewarding farmers for the work they do to safeguard our environment and helping us meet crucial goals on climate change and protecting nature and biodiversity.

We will move away from the EU’s bureaucratic Common Agricultural Policy and towards a fairer system which rewards our hard-working farmers for delivering public goods, celebrating their world-leading environmental work and innovative, modern approach to food production.

The Agriculture Bill sets out how farmers and land managers in England will in the future be rewarded with public money for “public goods” – such as better air and water quality, higher animal welfare standards, improved access to the countryside or measures to reduce flooding. This will contribute to the government’s commitment to reaching net zero emissions by 2050, while at the same time, helping to boost farmers’ productivity.

This will replace the current subsidy system of Direct Payments which pays farmers for the total amount of land farmed, skewing payments towards the largest landowners rather than those farmers delivering specific public benefits. Instead, the new measures will provide a better future for agriculture in this country, maximising the potential of the land for food production and for delivering public goods.

I am pleased that the Government has guaranteed the annual farm budget for each year of this Parliament and nearly £3 billion will top up the remaining EU funding to match the total funding for direct payments that was available for 2019.

We will continue to champion British produce and support farmers to adapt to our new pioneering approach to agriculture through a seven-year transition period in England, ensuring we unleash the potential of our farmers for the future. The Bill champions British food by improving transparency and fairness in the supply chain from farm to fork and through investing in new technology and research to ensure our world-renowned food producers remain competitive and innovative.

The Trade Bill will not undermine food standards. When we leave the EU, we will maintain the same import standards. No UK import standards will be diminished as part of a free trade agreement (FTA). We will also ensure that our own high domestic environmental protection, animal welfare and food safety standards are not undermined, by ensuring in any future agreement British farmers are always able to compete.

It is important to note that the UK currently operates trade on the grounds of adherence to sanitary and phytosanitary (SPS) requirements only. We do not require countries we trade with to follow UK domestic regulation on how food is produced, including in preferential trade agreements like CETA with Canada.

Nowhere else around the world do existing trade agreements include a requirement for partner countries to produce to another country’s domestic regulations and standards.  Insisting on UK domestic regulations being applied to the production of food, and not just on the SPS standards of what we allow to be imported, would be an unprecedented barrier to trade that doesn’t currently exist.  It would also damage developing nations where access to UK markets is key to lifting millions out of extreme poverty.

We will always ensure that UK FTAs are fair and reciprocal. British farmers will not face unbalanced competition. We will be involving the National Farmer’s Unions across the UK through the Government’s Strategic Trade Advisory Group and our sector specific expert trade advisory groups to ensure the views of the industry are represented. This means that they have a voice at the highest level of our trade negotiations.

Our analysis shows that the agri-food sector will benefit from a comprehensive trade agreement. An agreement will also benefit all parts of the UK, with Scotland and the Midlands set to benefit the most.

For example, an agreement with the US could remove tariffs of up to 26% on British beef, a market only recently opened and which is estimated to be worth £66m to UK farmers over the next 5 years. It could do the same for lamb. It is not well understood that the US are the second largest importers of lamb in the world and even a 3% market share could boost annual UK exports by £18m. That is why, the CEO of the National Sheep Association says a USFTA “would benefit sheep farmers in all parts of Great Britain.”

Trade also improves farming resilience. So, our trade is vital for carcass balancing, the ability to sell cuts not wanted in the UK – and to deal with demand shocks and seasonal availability. Trade agreements will help and enhance UK farmers’ access to new markets, boost productivity and generate valuable new opportunities.

It is worth noting that the Trade Bill before the House is a continuity Bill. It cannot be used to implement an agreement with a country that did not have a trade agreement with the EU before exit day, such as the USA. The trade bill is not about future deals and structures, it is about providing continuity for businesses so they can continue trading under existing arrangements. We are determined to negotiate positive agreements for all farmers, wherever they are in the UK. I know that my Ministerial colleagues have no intention whatsoever of lowering standards in transitioned trade agreements, as the very purpose of these agreements is to replicate as close as possible the effects of existing commitments in EU agreements. You will be pleased to hear that none of the 20 continuity agreements signed have resulted in standards being lowered.

All animals deserve to be respected and cared for throughout their lives, so I welcome the Government’s clear commitment that future trade agreements will uphold our country’s high animal welfare standards. These standards will not be watered down in pursuit of any trade deal.

Four public consultations were launched in 2018, providing people with the opportunity to give their views (for example, on animal welfare) in relation to how the UK should approach future Free Trade Agreement negotiations with the USA, Australia and New Zealand, and on the UK’s consideration of accession to the Comprehensive and Progressive Agreement for Trans-Pacific Partnership. All four consultations collectively attracted over 600,000 responses – making this one of the largest consultation exercises (by volume of responses) run by the UK Government. In any future potential trade agreement that the UK seeks to negotiate, the government will undertake proportionate consultation.

To provide continuity in our country’s existing trade relationships, the Government is transitioning existing EU trade agreements, to which our country is party, into UK law. As these trade agreements will be transitioned on the closest possible terms as each original agreement, this process will not have an impact on animal welfare standards. Outside the EU, the UK will remain party to bodies such as the World Organisation for Animal Health, the Convention on International Trade in Endangered Species, will continue to promote improved animal welfare standards internationally.

There is no place in this country for animal cruelty, which is why I have previously supported the Government’s proposals to recognised animal sentience and increase maximum sentences for animal cruelty from six months to five years' imprisonment. I understand the disappointment when these Bills fell at the end of the last Parliamentary session (due to the election), but the Government is still committed to making any necessary changes to UK law in a rigorous and comprehensive way to ensure animal sentience is legally recognised after the transition period and Legislation will be brought forward when Parliamentary time allows.

Despite the unexpected delays that has been caused by the coronavirus outbreak and the changes to the setup of Parliament, the Animal Welfare (Sentencing) Bill is currently scheduled to next be debated on 23rd October and I will be there to support this Bill again.

Further action is being taken to improve animal welfare at home and abroad by banning third party sales of puppies and introducing one of the world’s toughest bans on ivory sales. I believe these very welcome steps demonstrate exactly how seriously this Government takes animal welfare.

Having left the EU, I am pleased that the UK will have the opportunity to do even more. A consultation will shortly be carried out on restricting live animal journeys, requiring approval for longer journeys and bringing forward welfare conditions for these journeys when they are necessary. The Government is also looking at proposals to ban the trade in pet primates, extending compulsory microchipping to cats and controlling the trade in hunting trophies from endangered animals. We are a nation of animal lovers and I am pleased with the commitments to make Brexit work not just for citizens, but for the animals we love and cherish too.