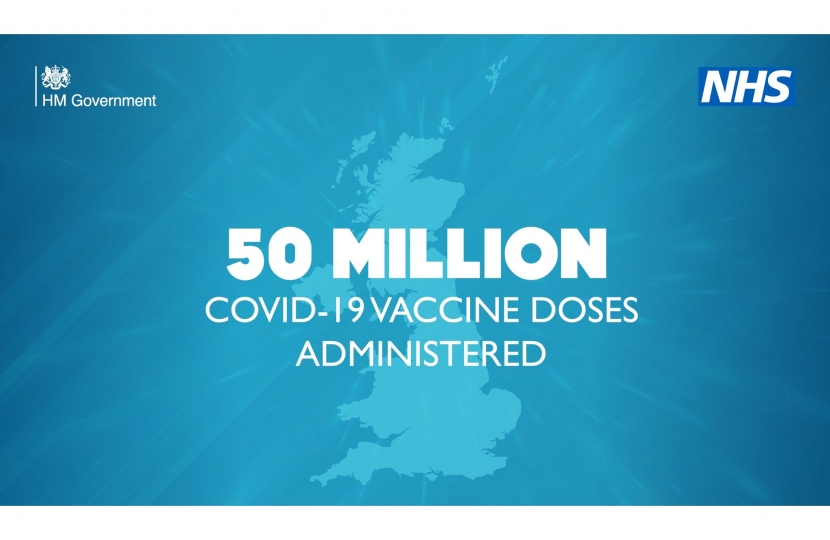 All adults over 50, the clinically vulnerable, and health and social care workers have been offered a life-saving jab – meaning we reached our target for offering a first dose to priority groups 1-9 ahead of schedule.

We are now asking people over the age of 40 to come forward and get their jab. We remain on track to reach all adults by the end of July - around 53 million people.

Lifting restrictions: Limit on mourners at funerals to be removed 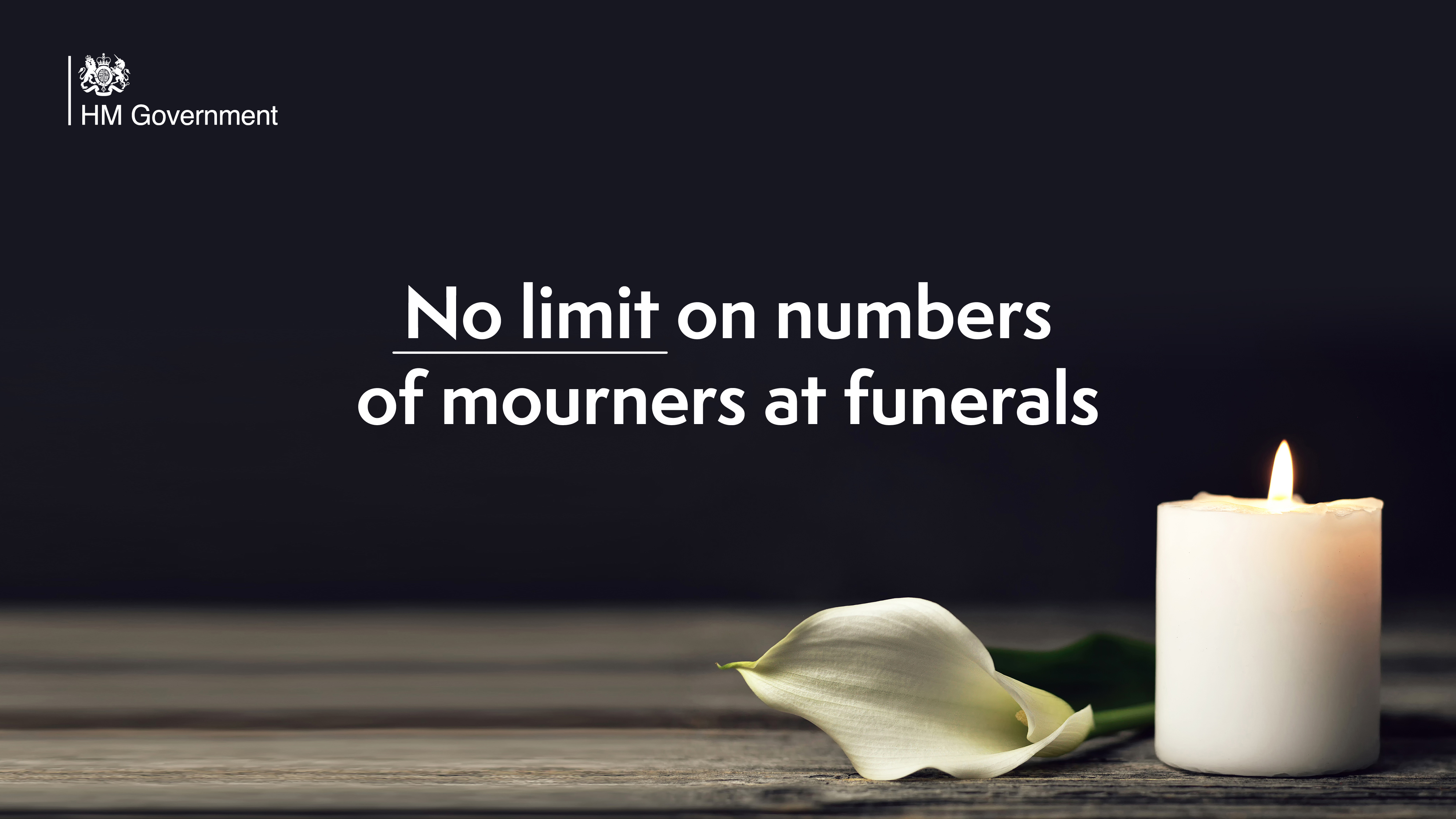 Yesterday the Government announced that the limit on mourners at funerals will be removed as part of Step 3 of the roadmap, to take place from 17 May at the earliest, allowing families and friends to pay their respects to loved ones in greater numbers.

The British people have made huge sacrifices throughout the pandemic to protect the NHS and save lives, and nowhere is that more apparent than in the deeply painful restrictions on the numbers attending funerals. That is why the Government are pleased to say that we are now in a position, thanks to the continued efforts of the British people and the successful rollout of the vaccine, from 17 May we will be able to remove the limit of mourners at funerals, and allow more friends and family to come together and pay their respects.

Instead, the number of people who can attend a funeral will be determined by how many people the venue, such as the relevant place of worship or funeral home, can safely accommodate with social distancing. This includes both indoor and outdoor venues. Capacities of venues will vary, but many will allow significantly more than 30 people to attend. Limits for other life or commemorative events at Step 3, such as weddings and wakes, are expected to remain as set out in the roadmap.

After such a challenging year there is now light at the of the tunnel as we continue to move through our roadmap and safely return to spending more time with our loved ones and return to normality.

For more information on the updated guidance for funerals as part of Step 3 of the roadmap, including comments from the Communities Secretary, please visit: https://www.gov.uk/government/news/limit-on-mourners-at-funerals-to-be-removed.

As part of our continued expansion of regular testing, a major new pilot will consider whether daily testing can offer a safe alternative to self-isolation for those who come into contact with someone who has tested positive for COVID-19, allowing people to carry on going to work and doing the things they love.

The Government appreciates the huge sacrifices that the British public have made at every stage of this global pandemic – including self-isolating when they are asked. That is why we are undertaking a major new study of more than 40,000 people which will consider how rapid daily testing could offer a viable alternative to self-isolation for people who are contacts of positive Covid-19 cases, allowing people to carry on going to work and living their lives.

Alongside the phenomenal progress of our vaccination programme and the rollout of regular testing, the Government is considering every option to safely reclaim our lost freedoms as we continue to build back better. 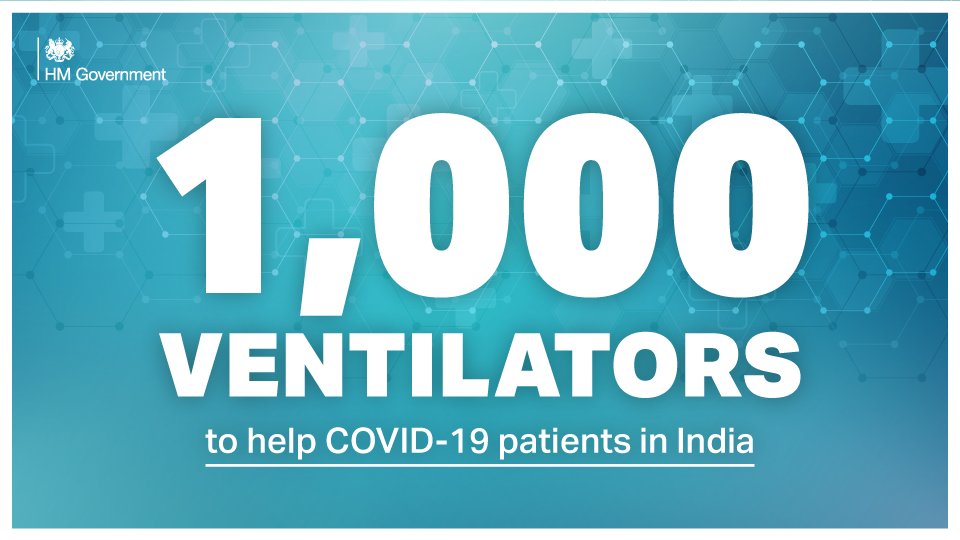 The Government are sending further life-saving support to India as they battle a surge in coronavirus cases – reinforcing our commitment to help our Indian friends in their hour of need.

The terrible images we have seen in India in recent weeks are all the more powerful because of the close and enduring connection between the people of the UK and India. That is why the Government are continuing to support the Indian people in their fight against COVID by supplying 1,000 ventilators and establishing of a clinical advisory group to share expertise and experience as the country deals with the world’s worst surge in infections. This is in addition to 200 ventilators, 495 oxygen concentrators and 3 oxygen generation units the UK announced we were sending to India last week.

Chief Medical Officer Chris Whitty and Chief Scientific Adviser Patrick Vallance have also spoken to their Indian counterparts to provide advice, insight and expertise to the Indian healthcare system as it deals with the world’s worse surge in COVID levels.

The UK will always be there for India in its time of need and the Government will continue to work closely with the Indian Government in the global fight against the pandemic.

For more information on UK’s further life-saving support to India, including comments from the Prime Minister and the Foreign Secretary, please visit: https://www.gov.uk/government/news/uk-sends-further-life-saving-support-to-india.