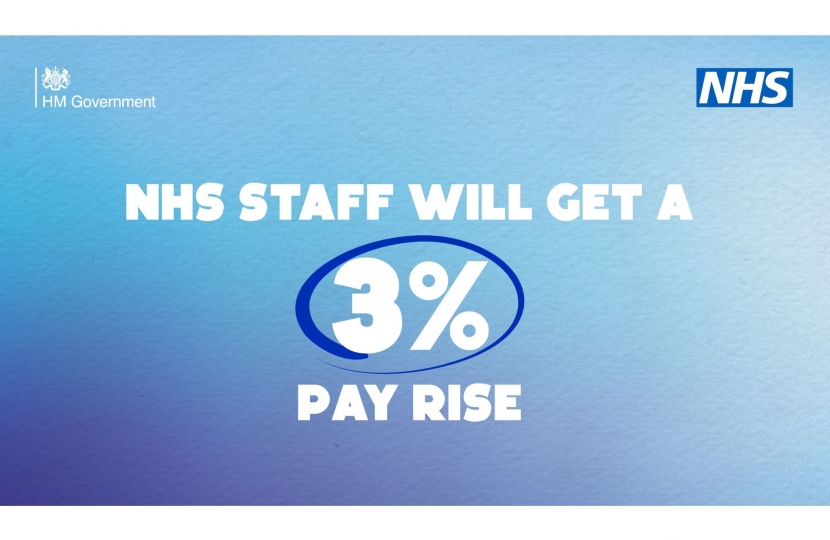 Yesterday the Government announced a 3% pay rise for NHS staff, after we committed to providing a pay uplift in recognition of their extraordinary work and the impact of the pandemic.

Our frontline NHS workers have played a vital and unique role throughout the pandemic – and it is right that we recognise their contribution, despite the wider public sector pay pause. That is why the Government is accepting in full the independent pay review bodies' recommendations to give a 3% pay rise, a real terms increase, to over 1 million of our NHS staff – from nurses and doctors, to paramedics and porters – a pay rise worth around £1,000 for an average nurse. The pay rise is backdated to April 2021.

The independent pay review bodies considered a range of evidence from organisations including the Government, the NHS and trade unions in order to reach their recommendations.

Salaried GPs’ recommended minimum and maximum pay will also be uplifted by 3% whilst dental contracts will be uplifted to account for the 3% uplift for dentists.

This latest NHS staff pay rise follows a multi-year pay deal agreed with trade unions, which over a million NHS staff benefited from and which included a pay rise of over 12% for newly qualified nurses, bringing the starting salary for a new nurse to almost £25,000, and increasing junior doctors’ pay scales by 8.2%. The Government are also ramping up our investment in our NHS, with a £6.2 billion increase for 2021-22, as part of our £34 billion commitment by 2024-25, and £3 billion for supporting recovery and reducing waiting lists. As part of that, the Government are increasing the number of staff in the NHS, with over 6,500 more doctors, almost 10,600 more nurses, and over 18,700 more health support workers in the NHS now than a year ago. The Government are also on track to have 50,000 more nurses in the NHS by the end of the Parliament - supported by a £513 million investment in professional development and increased recruitment.

The Government will continue to support all those in our health service who are working tirelessly to care for patients, as we focus on getting through this pandemic and building back healthier.

For more information on the NHS pay rise, including comments from the Health and Social Care Secretary and the Minister for Care, please visit: https://www.gov.uk/government/news/nhs-staff-to-receive-3-pay-rise.