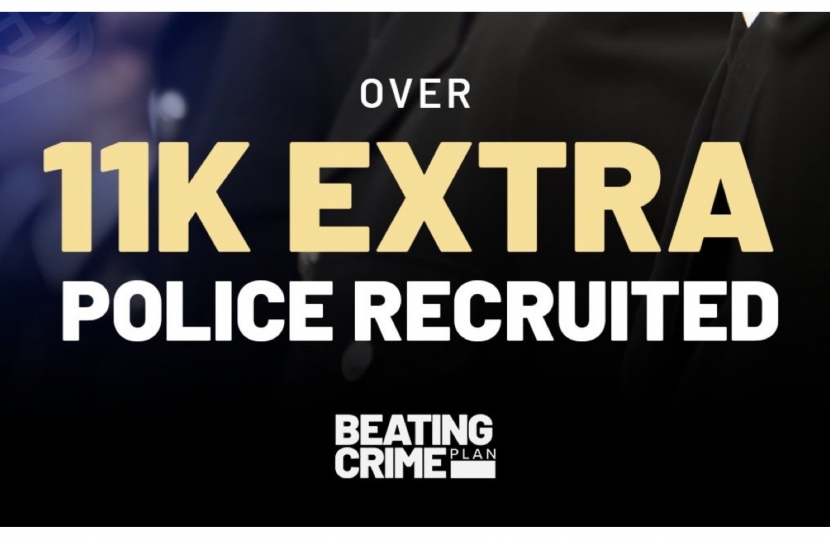 Rebecca Harris MP has welcomed the announcement that 235 police officers have been recruited in Essex since September 2019, bringing the total number of officers up to 3,551.

The latest figures are part of the Conservative Government’s drive to get 20,000 more police officers on the street by 2023, and puts the Government on track to fulfil its manifesto commitment.

Across the 43 police forces, an additional 11,053 officers have been recruited, bringing the total number of police officers in England and Wales to 139,908 – where they are already having an impact in tackling crime and keeping communities safe.

The latest figures also show that the police are more representative of the communities they serve. More than four in ten new recruits since April 2020 are female, and eight police forces across the country – Derbyshire, Lancashire, Greater Manchester, Staffordshire, Sussex, Thames Valley, Kent and Suffolk – have all hired more women than men. Additionally, over 11 per cent of new recruits identify as belonging to a Black, Asian, Mixed or other minority ethnic group.

The 11,000 extra officers will support the Conservative Government’s crack down on crime, which has seen the launch of the Beating Crime Plan and the passing of the Police, Crime, Sentencing and Courts Bill through the House of Commons.

The Beating Crime Plan – aimed at reducing crime, protecting victims, and making the country safer – will see investments in school-based interventions methods, increased tagging to reduce repeat and substance-fuelled offences, and ensures that offenders give back to their communities through unpaid work.

The Police Crime, Sentencing and Courts Bill – which is currently passing through the House of Commons – gives the police the resources they need to crack down on crime, including additional powers to tackle disruptive protests, increased sentences for the most dangerous offenders, and additional protections for women and girls.

This builds on the action already taken by the Conservative Government since Boris Johnson became Prime Minister two years ago – including boosting police funding to a record £15.8 billion and delivering £70 million through the Safer Streets Fund to make neighbourhoods secure.

“From working with our local police force, I know just how valuable 235 more police officers will be in helping to crack down on crime.

“The 235 additional recruits mean there are now 3,551 police officers in Essex, helping to keep neighbourhoods secure and reassuring the law-abiding majority that they are safe.

“These figures show that – once again – the Conservatives are delivering on our manifesto commitments, keeping communities safe and delivering on the people’s priorities”.

“It is fantastic that we are now over half-way in delivering on our commitment of 20,000 more police officers by 2023.

“Every police force area in our country will benefit from more officers, meaning safer streets, secure neighbourhoods, and more support for victims”

“I am delighted that we have recruited over 11,000 new police officers in England and Wales. These figures mean we are well on track to meet our target of recruiting 20,000 extra police officers by 2023.

“Together with our Beating Crime Plan, this Government is determined to crack down on crime and back our police with the powers they need – and these figures mean there are now over 11,000 additional police officers able to shut down drug gangs, take knives off our streets, and protect communities from harm”.

For any information on the Home Office's announcement that more than half of the promised 20,000 additional police officers have now been recruited, including comments from the Prime Minister and the Chair of the National Police Chiefs’ Council, please visit: https://www.gov.uk/government/news/over-11000-police-hired-with-more-women-than-ever-before .

On Saturday, the Prime Minister announced new measures to reduce the spread of COVID-19, taking precautionary steps to bolster our wall of defence against the virus.