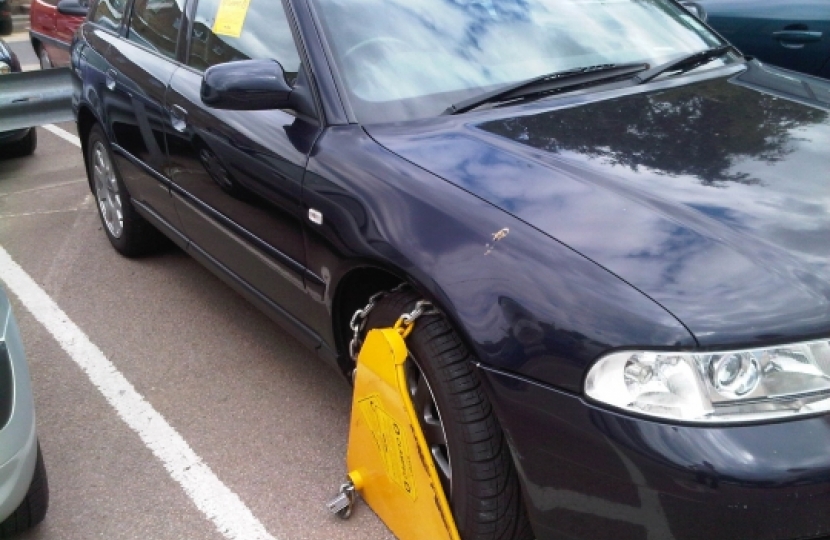 One of Rebecca's first campaigns as a Member of Parliament was to bring about a change in the law in relation to the legislation governing private clamping companies.

Rebecca was particularly concerned about the number of instances where individuals managed to win a county court judgment against such companies, but were never paid back. In 2010 there were 19 people with County Court judgments against one such company, who owed £14,000 in compensation, who were still waiting to receive their award.

Speaking at the time, Rebecca said:

"I want to introduce a very strict code of conduct on the clampers and if they fail to abide, we will take away their licence and they will go out of business."

Rebecca was keen to put an end to what in her view was a process of "legalised mugging". After sustained pressure from Rebecca, the Protection of Freedoms Act of 2012 received Royal Assent and clamping was made illegal on private land. The Act also scaled back the ability of rogue clampers and companies to clamp car owners.

"This Bill is good news for people across Essex, as it will mean car clamping on private land will be made illegal. Too many of our constituents have been exploited by car clamping companies who were interpreting the old law far beyond what was originally intended and this new Bill will help stop that practice in the future, which is why we are all collectively very happy to support it."

I was pleased to support the Government's new package of measures to protect drivers from unfair and extortionate charges, with a new Code of Practice to help keep cowboy private parking firms in check.

The Government’s Parking Code of Practice will see parking fines cut by up to 50% in the majority of cases, saving motorists millions of pounds each year.

Fresh measures proposed in the new Code and Framework include the creation of a mandatory single Appeals Service and Appeals Charter for motorists to turn to if they are unfairly fined.

The new Code of Practice builds on action the Government has already taken to tackle rogue private parking firms, including banning wheel clamping and towing and stopping over-zealous parking enforcement by councils.