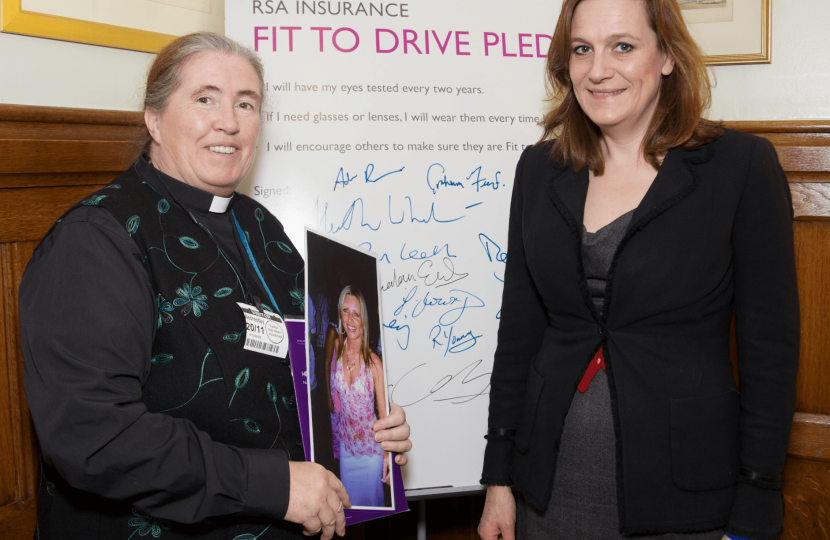 Rebecca has campaigned on the issue of medical fitness to drive ever since hearing the heartbreaking story of one of her constituents, Reverend Brenda Gutberlet. Revd Gutberlet lost her niece, Natalie Wade, in a tragic car accident in 2006. Natalie was killed while on the way to buy her wedding dress by a driver who had been told by medical professionals that his eyesight was far too poor to continue driving.

Rebecca and Reverend Gutberlet have been campaigning to get drivers who are knowingly medically unfit off the roads to prevent a similar tragedy happening to any other family.

In January this year, Rebecca was pleased to be able to arrange for Revd Brenda Gutberlet to meet with the Secretary of State for Transport, The Rt Hon Patrick McLoughlin.

·         The meeting went well and Brenda was able to put all her points across to Mr McLoughlin, who was very keen to hear how she thought the law could be changed. Brenda particularly raised the important point that currently it is up to the driver to report changes in their medical condition, like deteriorating eyesight, to the DVLA through an 'honesty declaration', but not their doctors or optometrists. Rebecca and Brenda also pointed out that the Road Traffic Act has not been updated since 1988 and the current practical visual test for drivers of reading a number plate from 20m has not changed since it was introduced in 1937!

“I will continue to support Brenda in her campaign because it is vital that we stop drivers who are not medically fit to drive from getting behind the wheel, so we can prevent other families suffering the same tragedy as Natalie’s.”

"We need to look at ways of encouraging more regular eye testing. One way forward could be through a compulsory eyesight test to replace the current, and frankly inadequate, number plate test when applying for a driving licence.

At the very least though we need to make the public more aware of their responsibility when it comes to getting behind the wheel.  I would therefore encourage drivers in Castle Point to get their eyes tested regularly to make sure they are up to the standard to drive, to prevent tragedies like the one that happened to Natalie."