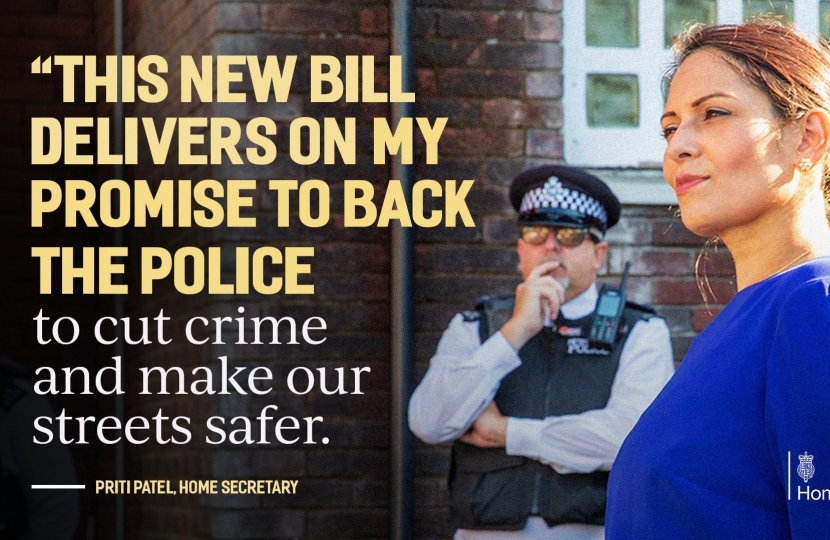 We need a fair justice system – one that stands for the law-abiding majority, not the criminal minority. The Government pledged to crack down on crime and build safer communities – and our Police, Crime, Courts and Sentencing Bill delivers on that commitment, ensuring punishments fit the severity of the crime .

The Government are introducing new protections and powers for the police while reforming sentencing. Measures include:

Ever since the first large-scale Extinction Rebellion protest in April last year I have been talking publicly and with the government about the potential for change to powers and to legislation that would enable the police to deal better with protests in general given that the act that we work to – the Public Order Act – is now very old, [dating to] 1986.

But specifically to deal with protests where people are not primarily violent or seriously disorderly but, as in this instance, had an avowed intent to bring policing to its knees and the city to a halt and were prepared to use the methods we all know they did to do that. - Metropolitan Police Commissioner, Cressida Dick

What is the Bill going to do?

The measures in the Bill will allow the police to take a more proactive approach in managing highly disruptive protests causing serious disruption to the public. Provisions in the Bill will:

This measure will enable the police to impose conditions such as start and finish times and maximum noise levels on static protests. The police already have the power to impose such conditions on marches.

This measure will broaden the range of circumstances in which the police can impose conditions on protests, including a single person protest, to include where noise causes a significant impact on those in the vicinity or serious disruption to the running of an organisation. The Home Secretary will have the power, through secondary legislation, to define and give examples of “serious disruption to the life of the community” and “serious disruption to the activities of an organisation which are carried out in the vicinity of the procession/assembly/one-person protest”. These regulation-making powers will clarify ambiguous cases where, if they arise, it would not be clear whether the threshold for the use of such powers have been reached. This will enable the police to make use of their powers with the confidence that they are doing so legally.

This measure will close a loophole which some protesters exploit. Some will cover their ears and tear up written conditions handed to them by the police so that they are likely to evade conviction for breaching conditions on a protest as the prosecution have to prove that the person “knowingly fails to comply with a condition imposed”. The Bill will change the threshold for the offence so that it is committed where a person “knows or ought to have known” that the condition has been imposed.

The Bill will implement a recommendation by the Law Commission to introduce a statutory offence of public nuisance, and repeal the existing common law offence. This will provide clarity to the police and potential offenders, giving clear notice of what conduct is forbidden.

This measure will enable the police to direct an individual to cease obstructing vehicular entrances to Parliament and make it an offence not to comply with such a direction. This will protect the right of access to the Parliamentary Estate for MPs, Peers and others with business there as recommended in the Joint Committee on Human Rights in their 2020 report on Democracy, freedom of expression and freedom of association: Threats to MPs.

Freedom of assembly and freedom of expression are vital rights that the United Kingdom fully supports. The rights of an individual to express their opinion and protest are a cornerstone our democratic society.

There is, and will remain, a balance to be struck between the rights of the protestor and the rights of individuals to go about their daily business. However, there are instances where individuals at a protest behave in a way that causes unjustifiable disruption or distress to others.

In recent years we have seen a significant change in protest tactics which have led to disproportionate amounts of disruption. The current legislation the police use to manage protests (the Public Order Act 1986) was enacted over thirty years ago. The Commissioner of the Metropolitan Police Service has called on the Government to update this ageing legislation to allow the police to safely and effectively manage the highly disruptive protests we see today. The Home Office has therefore engaged with Police Chiefs and commissioned Her Majesty’s Inspectorate of Constabulary and Fire & Rescue Services to conduct an inspection into the policing of protests to understand what needs to be to ensure that the police can safely manage highly disruptive protests whilst preserving citizens’ freedoms of expression and assembly.

The Government is proposing several changes in the law which will improve the police’s ability to proactively manage the most disruptive protests, and provide punitive outcomes that reflect the seriousness of offences committed by protesters.

Will these measures undermine freedom of expression?

No, freedom of expression is a cornerstone of British democracy. The majority of protests in the England and Wales are lawful and will be unaffected by these changes. These measures will balance the rights of protesters with the rights of others to go about their business unhindered. They will achieve this by enabling the police to better manage highly disruptive protests.

Why are these measures needed?

Existing public order legislation was passed in 1986 and is no longer fit for managing the types of protests we experience today. The highly disruptive tactics used by some protesters cause a disproportionate impact on the surrounding communities and are a drain on public funds. For example, the Metropolitan Police Service’s cost for policing Extinction Rebellion’s 2019 “April Uprising” in London was over £16 million. These measures will improve the police’s ability to manage such protests, enabling them to dedicate their resources to keeping the public safe.

How will protesters’ rights be protected?

When using these, or existing public order powers, the police must act within the law and be able to demonstrate that their use of powers are necessary and proportionate. They must act compatibly with human rights, principally Article 10 (freedom of expression) and Article 11 (freedom of association).

What conduct will the new public nuisance offence capture?

Conduct captured will include nuisances such as producing excessive noise or smells, or offensive or dangerous behaviour in public, such as hanging from bridges.

The Police, Crime, Sentencing and Courts Bill - Justice Overhaul to Better Protect the Public and Back Our Police

Today, the Government are introducing new legislation to Parliament which will deliver on our manifesto commitment and give the police and courts greater powers to do their jobs, whilst ensuring the most violent criminals spend longer behind bars.