Vaccine Update: Over 12 million people have received a vaccine 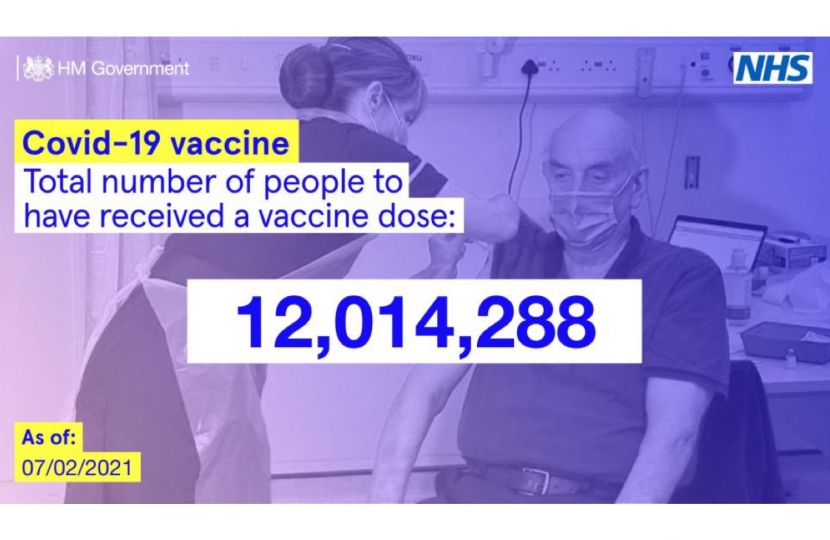 Over 12 million people have received a vaccine so far across the United Kingdom. The NHS have administered more than 12.5 million vaccines across the UK. Around 90 per cent of over 80s have now been vaccinated, and over 90 per cent of those aged 75 and over.

Overall, the Government has now secured early access to over 407 million total doses of vaccines for 2021 and 2022. This means we will have the Oxford-AstraZenca vaccine manufactured in Oxford, Staffordshire and Wrexham; the Novovax vaccine made in Teesside and the Valneva vaccine, subject to approval, produced in Livingston, Scotland – a great example of what we can achieve together as one United Kingdom.

The Government has also confirmed that the NHS is aiming to offered vaccine all over-50s in UK, by May. The UK's vaccination programme is planned to have reached all nine priority cohorts by May, meaning that the Government can commit to go ahead with these polls with confidence.

Vaccines appear to be working well against the Covid-19 variants. Recent studies have shown that the vaccines being deployed right now across the UK appear to be effective against the variants currently dominant in the UK – with the Oxford/AstraZeneca vaccine showing sustained protection of 76 per cent during the 3-month interval before the second dose. And for other variants, even where a vaccine may have reduced efficacy in preventing infection, there may still be good efficacy against severe disease, hospitalisation, and death – this is vitally important for protecting our healthcare system.

Our brilliant scientists and medical advisors are now also working on the potential for new versions of existing vaccines to offer further protections against the variants –  just last week the Government announced an agreement with the manufacture CureVac to allow new varieties of vaccines to be developed quickly and to procure 50 million doses of a new version of a vaccine, if it is required.

The Government has ruled out Vaccine passports in UK. The Vaccine Minister, Nadhim Zahawi has explained that there were several reasons why vaccine passports would not be introduced, not least because the vaccine was not mandatory in the UK. "That's not how we do things. We do them by consent," he said. The minister said vaccine passports would be "discriminatory" and it wasn't clear what impact they would have on transmission of the virus.

Although, if other countries require you to show proof of that evidence then that is up to those countries. The vaccine minister has said that people could get evidence of their vaccination from their GP, but insisted that the Government will not be introducing vaccine passports.

Vaccine Update Booster Jabs: A booster dose of the coronavirus (COVID-19) vaccine is available for everyone aged 16 and over, and some children aged 12 to 15, who have had 2 doses of the vaccine at least 3 months ago.