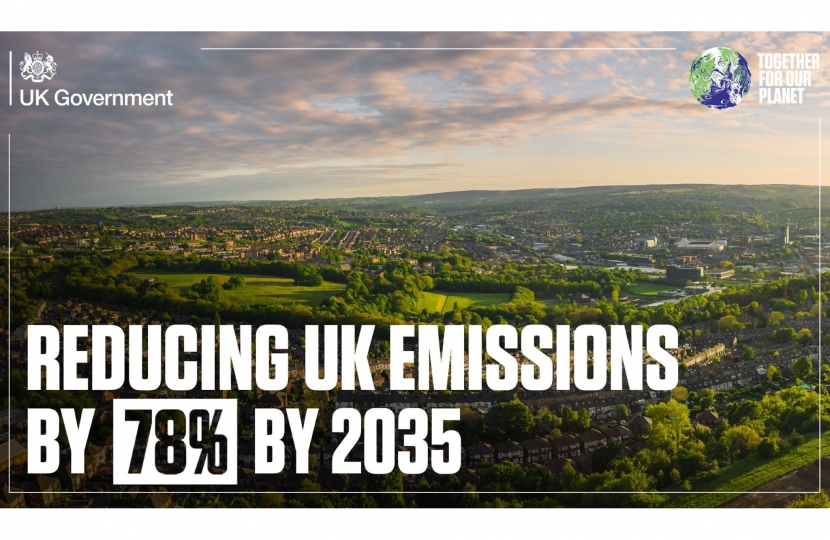 Today the Government will enshrine into law the world’s most ambitious climate change target, which will accelerate our efforts to meet our commitment of Net Zero by 2050, as we continue to raise the bar on tackling climate change -  championing innovation and green jobs as we build back better.

The UK is already leading the world in tackling climate change and setting ambitious targets. The Government is currently working towards its commitment to reduce emissions in 2030 by at least 68% compared to 1990 levels through the UK’s latest Nationally Determined Contribution - the highest reduction target made by a major economy to date. However, the Government wants to continue to raise the bar and set an example to other countries.

That is why, as part of the UK’s sixth Carbon Budget, we will set into law the world’s most ambitious climate change target – to cut emissions by 78% by 2035 compared to 1990 levels, bringing us more than three-quarters of the way towards being Net Zero by 2050 - fuelling new technologies, green innovation and creating jobs in the progress.

The new target will become enshrined in law by the end of June 2021, with legislation setting out the UK Government’s commitments laid in Parliament tomorrow (Wednesday 21 April).

The Government want to see world leaders follow our example and match our ambition in the run up to COP 26, as we can only build back better, and greener, and protect our plant if we come together to take action.

The UK is the first country to enter legally binding long-term carbon budgets into legislation, first introduced as part of the 2008 Climate Change Act. Since then, 5 carbon budgets have been put into law putting the UK on track to meet our ambitious goal to eliminate our contribution to climate change by 2050 and achieve net zero emissions.

The UK over-achieved against its first and second Carbon Budgets and is on track to outperform the third Carbon Budget which ends in 2022. This is due to significant cuts in greenhouse gases across the economy and industry, with the UK bringing emissions down 44% overall between 1990 and 2019, and two-thirds in the power sector.

Prior to enshrining its net zero commitment in law, the UK had a target of reducing emissions by 80% by 2050 – through today’s sixth Carbon Budget announcement, the Government is aiming to achieve almost the same level 15 years earlier.

Moreover, the UK continues to break records in renewable electricity generation, which has more than quadrupled since 2010 while low carbon electricity overall now gives us over 50% of our total generation.

For more information on the UK’s sixth Carbon Budget, including comments from the Prime Minister and the other ways the Government will reduce emissions, please visit: https://www.gov.uk/government/news/uk-enshrines-new-target-in-law-to-slash-emissions-by-78-by-2035.