Statement on this week's indicative votes on Brexit 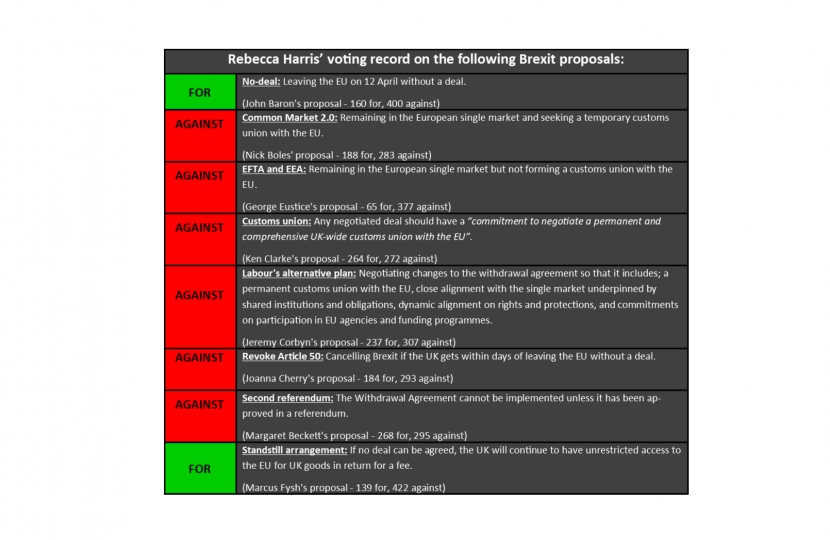 On Monday, the Speaker broke with hundreds of years of Parliamentary convention by allowing backbench MPs rather than the Government to come up with their own plans for Brexit, and to vote for them in a series of votes. I voted against this, not because I have a problem with MPs putting across their own ideas, but because it sets a precedent of allowing MPs to set policy across the whole scope of Government. I believe that Governments should be able to carry out the manifesto commitments that won them the votes to put them in Government. The Government had offered to allow Government time to debate and agree alternatives that might have majority support in Parliament. This would have achieved the same objective without tearing up our Parliamentary procedures.

In effect, John Bercow has altered our constitution to enable remainers in the House of Commons seek a softer Brexit than the Prime Minister’s deal or prevent our withdrawal altogether. No party has an overall majority in the House, so the Government are vulnerable to small numbers of rebels holding them to ransom if they team up with Labour the Liberal Democrats, The Independent Group and the SNP to do so. On top of this, the Labour Party, despite pledging to honour the result of the Referendum in their manifesto, seem hell-bent on frustrating our withdrawal by seeking a permanent customs union with the EU. As someone who has been a passionate supporter of leaving the EU for all my adult life and believes the Referendum result was an explicit instruction from the British people, this is totally unacceptable to me.

Last night, the House voted on eight alternative options to try and discover if there is a consensus in Parliament on how the UK should leave the EU. I voted in favour of leaving the EU without a deal because my priority is to ensure that we legally end our membership of the Union. This is what the majority of my constituents voted Leave to achieve in the Referendum (of the 160 MPs who voted for this 158 where Conservative Members, however, the motion was defeated by 400 MPs voting No). I also voted in favour of Marcus Fysh MP’s proposal which attempted to remove the need for a Withdrawal Agreement by paying for two years of stability with the EU after our departure in which our future trading relationship would be finalised. I also voted for this option as it would have smoothly ended our membership of the EU while providing businesses and citizens with certainty. I voted against all the other options because for me, they simply did not deliver the Brexit the British people voted for. Sadly neither motions got a majority of members in the House but both were predominantly supported by Conservative Members of Parliament.

It has become clear that there is not a majority in the House to leave the EU without a deal. So whilst I would be happy to leave on these terms and have voted numerous times in favour of this option, it has seemed clear to me that the only way to legally ensure our membership of the EU does end is with a Withdrawal Agreement which has been accepted by the other EU 27. This deal is the best deal which is likely available as our membership of the Customs Union, Single Market, and numerous other EU institutions will come to a permanent end. Jeremy Corbyn's  Labour Party do not support the Withdrawal Agreement because they want a soft Brexit, no Brexit, or just to defeat the Government for party political reasons to the detriment of the country. For these reasons, I am hopeful that the Speaker will no longer prevent the Withdrawal Agreement from being put to Parliament, and that it enables us to become a legally separate entity from the European Union by gaining the support of the House.