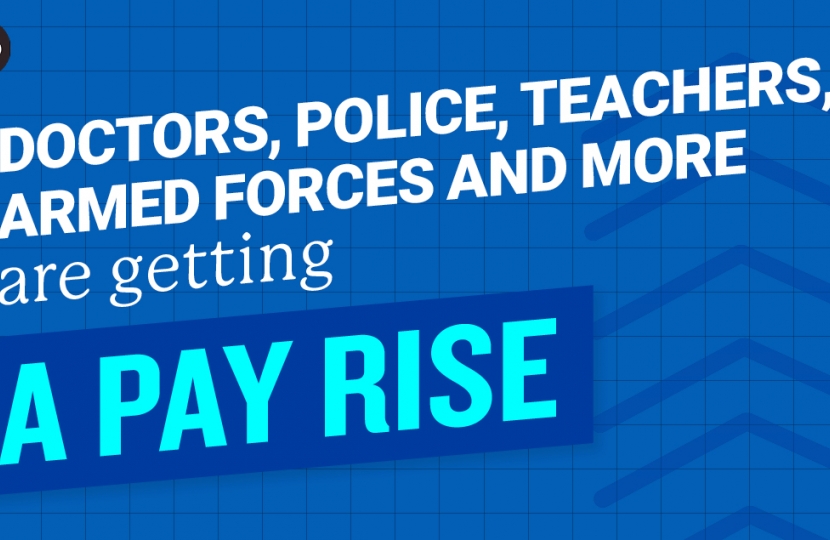 The Government has today announced that almost 900,000 public sector workers, including doctors, teachers and police officers, will see above-inflation pay rises – for the third year in a row for the majority – reflecting their dedication, hard work and contribution to our country.

Rebecca Harris MP has welcomed this year’s pay awards, which reflect the enormous effort made by those in the public sector during the coronavirus outbreak…

• NHS – doctors and dentists will receive a pay rise of 2.8%. As part of a three-year pay deal reached in 2018, nurses who are still moving up their pay structures will receive an average 4.4% rise this year. This year’s awards will benefit around 69,000 employees.

• Teachers – will receive the largest pay rise, with salaries increasing by 3.1%. This pay award is equivalent to a £1,250 increase to average classroom teacher pay.

• Police officers – will receive a 2.5% rise in pay. Police constables will earn up to £1,002 more this year. This comes as we’ve already recruited the first 3,005 officers as part of our plans to recruit 20,000 additional officers over the next three years.

• Armed Forces – will receive a 2% pay rise. This comes as 16,340 new recruits have joined the UK Regular Armed Forces over the last year, up 30% compared with the previous 12 months. Since 2017, the Armed Forced have benefited from increases to pay of 7%.

• More than one million NHS workers including nurses, will continue to benefit from the three-year Agenda for Change pay deal struck separately in 2018, under which the starting salary for a newly qualified nurse has increased by over 12% since 2017-18.

The Government has also set out how it will be helping people with the cost of living during this crisis. The Government has confirmed the largest ever cash boost to the National Living Wage in April – giving nearly 3 million workers a pay rise and has raised the National Insurance threshold to £9,500 – saving people approximately £100. Additionally, fuel duty will be frozen for the tenth year in a row, with duty rates on beer, spirits, wine and cider also frozen to keep more money in people’s pockets.

Rebecca has also hailed the measures to support public services throughout coronavirus. This includes providing the NHS with more than £31.9 billion of support for health services - over £15 billion for PPE procurement to protect frontline staff, £10 billion for our Test, Trace, Contain and Enable programme and a further £5.5 billion of spending on health services, including enhancing the NHS discharge service and delivering medicines to the vulnerable. The Government is also writing off over £13 billion of debt for NHS providers, freeing them up to investing in maintaining vital services. The changes will provide much needed financial support during this unprecedented viral pandemic, as well as laying secure foundations for the longer-term commitments set out last year to support the NHS to become more financially sustainable.

Police funding will also be boosted by up to £1.1 billion this year, the biggest increase in a decade. The funding increase includes £150 million to fight organised crime and online child abuse, £39 million to tackle serious violence including cracking down on county lines drug dealing, and a £90 million increase for counter-terrorism policing to help protect our streets.

In addition, the criminal justice system is being provided with over £280 million to support and modernise the current system, whilst creating jobs - £142 million for digital upgrades and maintenance to around 100 courts this year, £83 million for maintenance of prisons and youth offender facilities, and £60 million for temporary prison places, creating thousands of new jobs.

The Government’s Chief Scientific Adviser, Sir Patrick Vallance, and the Chief Medical Officer for England, Professor Chris Whitty, have addressed the nation today with an update on the rise of the spread of coronavirus and how the UK can stay safe in the pandemic.