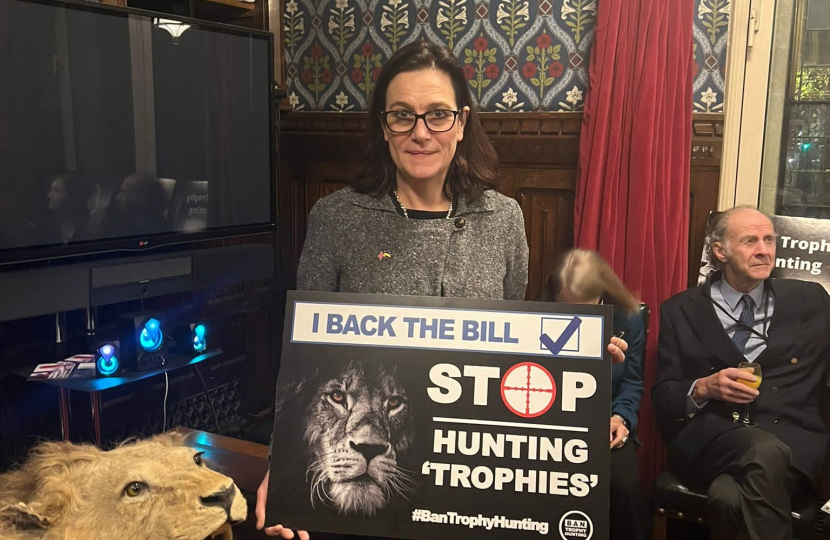 Rebecca Harris was in Parliament to support the Hunting Trophies (Import Prohibition) Bill. On Friday the 25th of November, the Bill passed it’s second reading in the House of Commons and has now moved forward to the Committee stage.

The Bill was introduced as a Private Member’s Bill by Conservative MP Henry Smith. The Bill will prohibit the import of endangered species as hunting trophies into Great Britain, helping to reduce the threats the species face.

“I am very pleased to back this Bill which delivers on our manifesto commitment to ban the import of hunting trophies from endangered animals abroad. The ban will be among the strongest in the world and is a testament to Britain being a nation of animal lovers that takes animal welfare very seriously.

This landmark piece of legislation has the backing of the Government as well as from UK wildlife and animal welfare groups. I met several of these groups in Parliament last week at an event led by Sir Ranulph Fiennes to express my support.”

This Bill builds on previous measures such as the Ivory Act, which Rebecca also voted for.  Brought forward by the Conservative Government this is one of the toughest bans on ivory in the world which came into force on 6 June 2022.

In the last 50 years, global wildlife has declined by 60%. A government consultation on an import ban in 2019 received over 44,000 responses. Results indicated clear support for tighter restrictions, with 86% of respondents supporting further action.

An estimated 25,000 trophy animals have been brought into the UK since the 1980s. Trophy hunting increases the threats endangered species face, with its impact for example on African lion populations – which have declined from an estimated 200,000 in the 1970s to less than 20,000 today – found to be the “single most significant effect” according to Oxford University research. Other popular animals shot by British trophy hunters include African elephants, hippopotamuses, black bears, leopards, zebras, and chacma baboons.

You can keep up to date with the stage of the Bill and its publications at: https://bills.parliament.uk/bills/3202