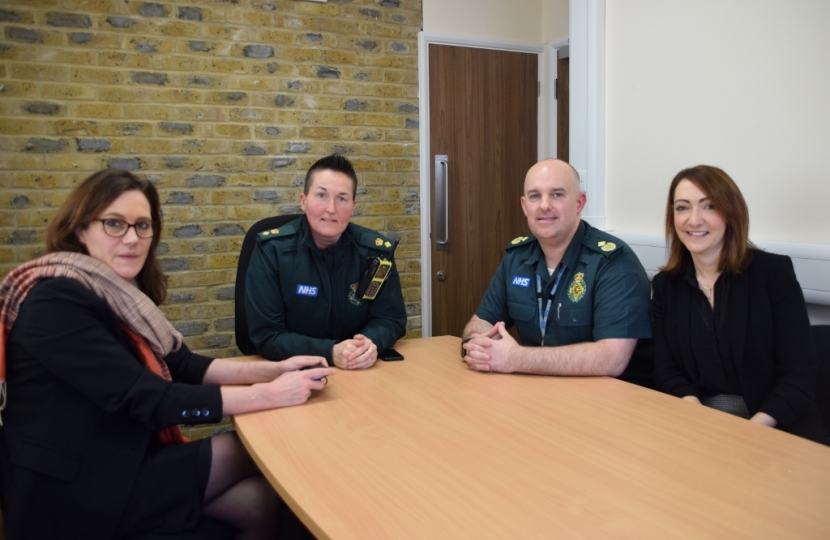 On Friday Rebecca met with East of England Ambulance Service (EEAST) at Southend Ambulance Station, to ask them to address her residents’ concerns over current plans to replace Canvey’s Rapid Response Vehicle with more Ambulance cover.

The EEAST is currently looking at how they can continue to improve their services following the introduction of the National Ambulance Response Programme, an NHS England initiative that is being rolled out across the country, with the aim to improve ambulance services and ensure highest quality & most appropriate response is provided for each patient.

The East of England Ambulance Service told Rebecca they are looking to invest in more equipment and staff so that they can respond more effectively to emergencies, and that patient safety is paramount to these new measures. Current plans being considered include replacing rapid response vehicles with more ambulances. These plans include a proposal that Canvey Island’s single RRV be replaced with more than one Ambulance. The main issues with rapid response vehicles is that they are not suitable on all occasions to transport patients to hospital. More ambulances will seek to address this problem.

Rebecca challenged the East of England Ambulance Service over a number of concerns Canvey Island residents had raised with her. One of the main worries was over response times and where these proposed new ambulances would be based.

Lisa Fautley Senior Locality Manager, responded: “We understand that residents have raised concerns with regards to traffic congestion and our ability to get to patients quickly on Canvey Island. However, we are satisfied that our blue light response is an effective means to access the area, especially when patients present with serious or life-threatening symptoms. EEAST is also pleased that regulators have commissioned a review of the capacity within the Trust which will result in more investment, enabling us to employ even more staff to provide patient care in the coming months and years.”

East of England Ambulance Service also explained that if the plans go ahead, this will happen gradually over the next 12 months and no changes will be made without the full involvement of staff and UNISON. The logistics of where these new vehicles would be based is yet to be decided on and will be addressed during the consultation.

Rebecca said: “EEAST have assured me that they are listening to the concerns of Canvey residents. They have promised me that there will be no change to the Rapid Response Vehicle on Canvey, until there has been a full staff consultation and they have secured extra funding to fully staff the replacement vehicles. I look forward to seeing the full plans as and when they develop.”