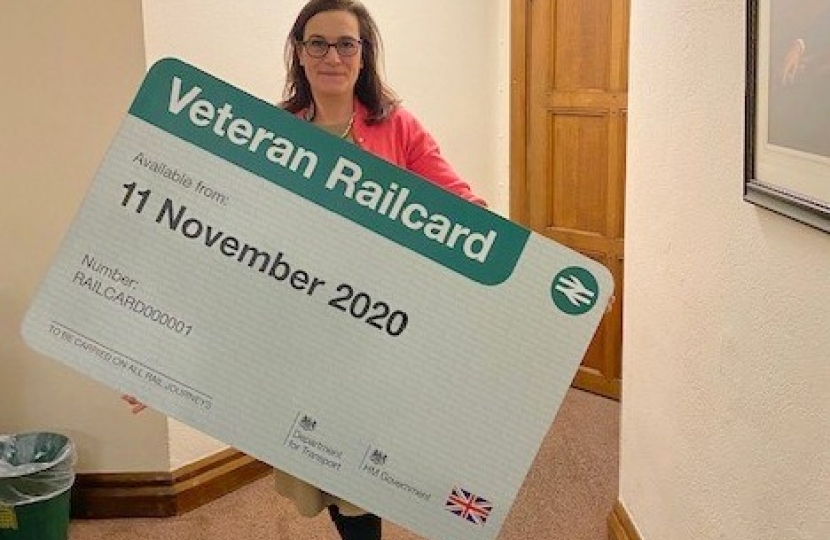 Rebecca Harris MP is glad that the new Veterans Railcard will go on-sale today, Wednesday 14 October. This commitment to support the veterans and their families was an important pledge in this Government’s manifesto and is being delivered just 10 months after the Election.

HM Armed Forces are rightly valued throughout their service. They make sacrifices and put themselves in danger to serve and protect our country. It is only right that we continue to show how much we value their efforts – and the support given them by their families – once they leave the armed forces too.

This railcard will offer an additional 830,000 veterans, who are not covered by existing discounts or railcards, up to one-third off most rail fares from 5 November and will also extend discounted travel to a named companion and up to four dependent children, if travelling with the cardholder.

The Government believes it is important that our veterans have access to this railcard, supporting their access to vital work prospects and retraining opportunities, and making it easier for former members of the armed forces to stay in touch with friends and relatives.

Rebecca would welcome your support in spreading the word to veterans and their families in Castle Point.

The UK-Japan Comprehensive Economic Partnership Agreement (CEPA) is the first deal the UK has struck as an independent trading nation
A British-shaped deal that goes beyond the existing EU agreement, securing bespoke benefits for British businesses and citizens