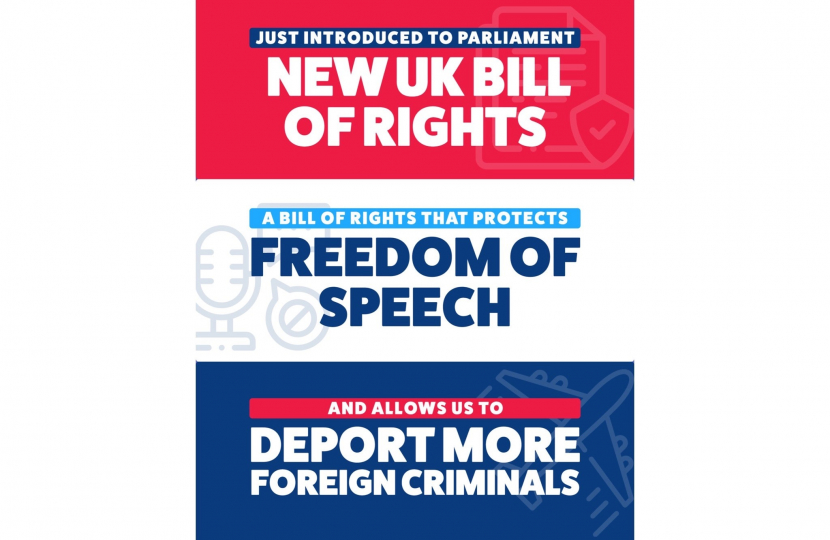 Rebecca Harris has welcomes the Government’s announcement today of a new Bill of Rights to strengthen freedom of speech and curb bogus human rights claims, bringing an end to claims wasting taxpayers’ money and court time.

Our human rights laws need reform – under the current system, those convicted of hurting their own partners and children have evaded deportation by claiming it would breach their right to family life. That is why the Government’s new Bill will reinforce freedom of speech, while making sure that courts cannot interpret laws in ways that were never intended by Parliament. It will also introduce a new permission stage in court to prevent trivial legal claims from wasting taxpayers’ money.

The Bill will also reinforce in law the principle that responsibilities to society are as important as personal rights. It will do this by ensuring courts consider a claimant’s relevant conduct, like a prisoner’s violent or criminal behaviour, when awarding damages.

“I am very pleased that the new UK Bill of Rights has just been introduced to Parliament, delivering on our manifesto commitment. Common sense should be at the heart of any legal interpretation of human rights and the rights of the Government to deport foreign criminals out of our country need to be strengthened. That is exactly what this Bill delivers and I am very proud to support it. The UK Supreme Court will be the ultimate final decision maker on cases of human rights in this country, not the European Court of Human Rights.”

The Bill of Rights will make it easier to deport foreign criminals by allowing future laws to restrict the circumstances in which their right to family life would trump public safety and the need to remove them. It will mean that under future immigration laws, to evade removal a foreign criminal would have to prove that a child or dependent would come to overwhelming, unavoidable harm if they were deported. As a result, any new laws will curb the abuse of the system that has seen those convicted of hurting their own partners and children evade removal by claiming it would breach their right to family life in the UK.

The Bill will make clear that the UK Supreme Court is the ultimate judicial decision-maker on human rights issues and that the case law of the European Court of Human Rights does not always need to be followed by UK courts. These reforms will strengthen freedom of speech and the role of UK courts, while helping us to deport more foreign offenders and better protect the public from dangerous criminals.

For any more information on the Bill of Rights, including comments from the Deputy Prime Minister, Lord Chancellor and Secretary of State for Justice and what else the Bill will do, please visit: https://www.gov.uk/government/news/bill-of-rights-to-strengthen-freedom-of-speech-and-curb-bogus-human-rights-claims.