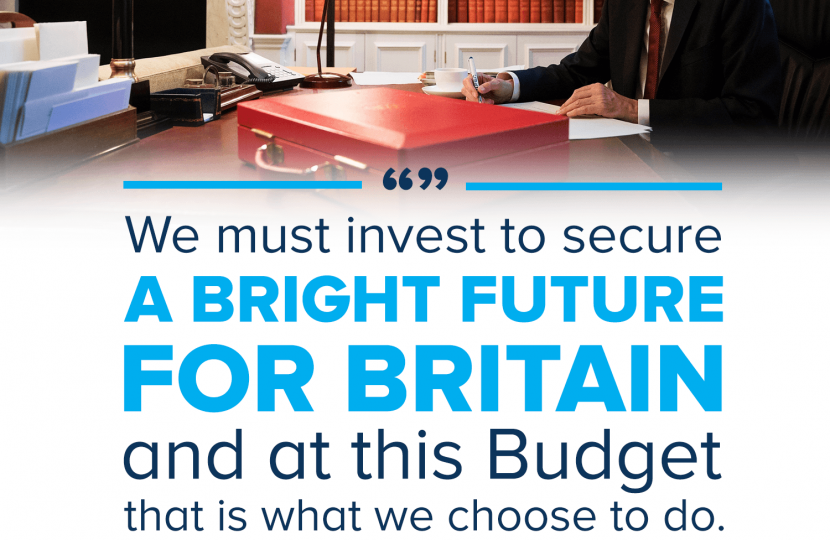 Rebecca Harris MP for Castle Point has today welcomed this year’s Autumn Budget. The Chancellor Philip Hammond announced a range of policies investing in the long term future of Britain while also supporting families and businesses across the country. Over £30 billion will be invested to transform productivity in the economy with investment in rail, broadband, science, education and innovation.

From April next year, the National Living Wage will rise by 4.4 per cent to £7.83, meaning full-time workers are £2,000 better off since it was first introduced. The personal allowance will also rise to £11,850, meaning the typical basic rate tax payer will be £1,075 a year better off compared to 2010. The Government has also listened to concerns over Universal Credit and has unveiled a £1.5 billion package aimed at addressing concerns about the delivery of the benefit.

The Budget also detailed plans to invest more in the NHS. £350 million will be invested over this winter with a further £1.6 billion pledged for next year. Overall the NHS will receive an extra £2.8 billion increase in funding to 2019-20. This will help the NHS deal with increasing pressures. Hospitals in Southend, Chelmsford and Basildon will benefit from increased funds to help with transformation. This could see new operating theatres, improvements in IT and around 50 extra inpatient beds.

Importantly the Government announced action aimed at getting young people onto the housing ladder. Stamp duty has now been abolished for over 80% of first time buyers. It has been scrapped altogether for all first time buyer purchases up to £300,000, and it will also be available to properties up to £500,000. An additional £15 billion will be invested in housebuilding, helping to improve our housing infrastructure, unlock sites and support small builders. The Chancellor outlined the Government’s commitment to protecting our green belt while making better use of urban land.

Rebecca said “This is a very exciting Budget that helps tackle many of the issues that we are facing today. The Chancellor is taking a balanced approach to spending with debt falling but with taxes being kept low and our public services receiving the investment they need. I am pleased that action is being taken to help get our young people onto the housing ladder while also protecting our green belt. The policies announced lay the foundations for a Britain fit for the future.”