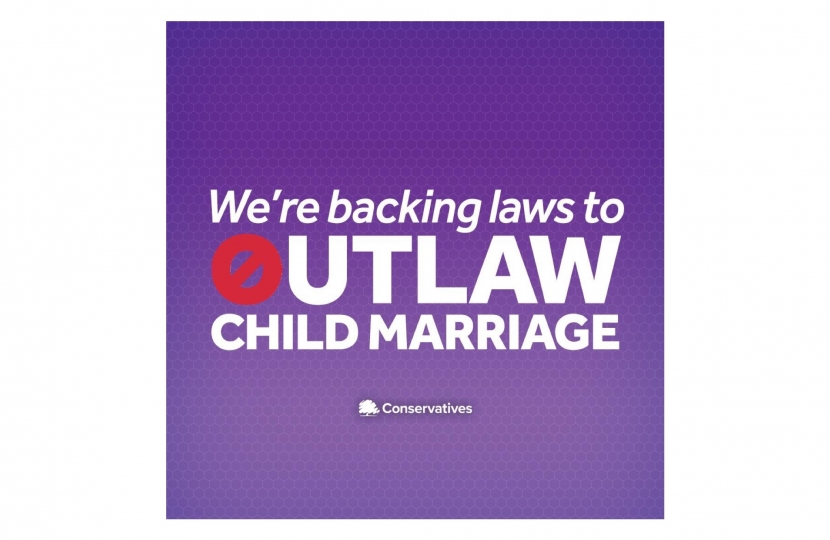 A Bill seeking ban on child marriage in England & Wales, has been debated in the House of Common this Friday. Rebecca welcomes the progression of the Marriage and Civil Partnership (Minimum Age) Bill seeks to raise the domestic age of marriage and civil partnership to 18 in England and Wales, removing the ability for 16-17-year-olds to marry with parental or judicial consent. Under the existing law in England and Wales, people can enter a marriage or civil partnership at the age of 18, or at 16-17 with parental or judicial consent.

The Private Member’s Bill brought forward by Conservative MP Pauline Latham has gained cross-party support. There remains strong concern that our law should not allow children to enter marriage under any circumstances. Research has shown that child marriage is often associated with:

It is also true that girls are more likely to be impacted by child marriage. For instance, in England and Wales in 2018, 28 boys married under the age of 18, compared with 119 girls.

The Government recognises, though, that legally valid marriages are not the only manifestation of child marriage. Children can also be made to take part in ceremonies of marriage which are not legally binding. Last year the Forced Marriage Unit provided advice and support for 113 victims or potential victims of forced marriage who were under the age of 16. While these ‘marriages’ are not recognised by the law, they will still count as a marriage for the children involved and their families and can lead to all the disadvantages that a legally valid marriage would, if not more. It is already illegal under our forced marriage legislation for someone to use violence, threats or another form of coercion to make a child enter such a marriage. But unless the child is deemed not to have capacity to consent to marriage then it is not currently illegal to arrange for a child to enter a marriage if such coercive behaviour is not used.

Rebecca Harris MP is pleased that this Bill will close that loophole and mean that it is against the law for someone to arrange the marriage of a child under the age of 18 in all circumstances.

“I am pleased to have supported the Marriage and Civil Partnership (Minimum Age) Bill which will rightfully raise the minimum age of marriage and civil partnership to 18, but also criminalise any marriage, including non-legalised religious marriages, under that age. By banning child marriage we are safeguarding children’s futures, ensuring they have the opportunity to succeed in life.”

These changes in the law would mean there will be one less obstacle to children completing their education. Children will also have more time to grow and mature before entering a marriage or a civil partnership; which is a life-long commitment with significant legal and financial consequences.

You can also keep up to date with the stage of the Bill and its publications at: https://bills.parliament.uk/bills/2900.

Yesterday, the Government announced that all travel testing measures will be removed for vaccinated arrivals, setting Britain free ahead of the crucial half term and spring holiday season.