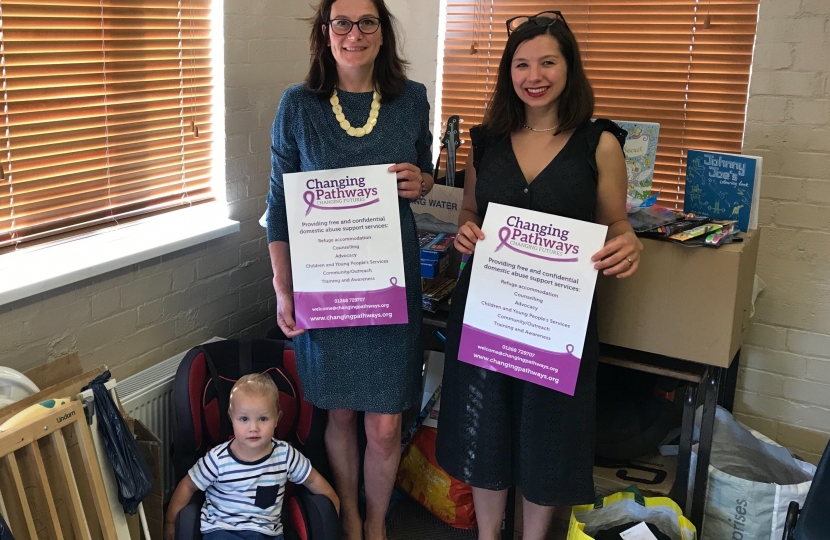 Rebecca Harris MP has been working closely with Castle Point Councillor Nikki Drogman to organise a donation for Changing Pathways. Formally known as Basildon Women’s Aid, Changing Pathways is a domestic abuse charity working across Basildon, Brentwood, Castle Point, Rochford and Thurrock. The charity organise a range of needs led services including but not limited to refuge accommodation for up to 43 women, counselling and, advocacy for high risk victims. Unfortunately, donations to women’s refuges from the public have recently been in decline.

Rebecca commented “Changing Pathways helps those in need around Castle Point and South Essex. I’d encourage anyone who is having a clear-out to consider donating to the White Hart Pub or the Parklands Centre”.

Councillor Nikki Drogman launched the appeal encouraging donations of necessities such as toiletries, long life food and, toys for women and children escaping domestic abuse. Councillor Drogman said "The surgery is for residents to pop in with questions and to discuss important issues with local Councillors, but we also felt we could use this opportunity to help some of the most vulnerable women and children in our community. I'm overwhelmed by the generosity of everyone that donated, including Cllr Pat Haunts and our MP Rebecca Harris."

Changing Pathways receive donations between 10am and 4pm at Parklands Centre, Felmores End, Felmores, Basildon, Essex, SS13 1PN. After a successful appeal, a second drop-off point at the White Hart Pub in Thundersley has been set up to allow residents to bring donations at any time. Items such as long life food, nappies, nightwear and dressing gowns are currently most in demand alongside gift vouchers for supermarkets in the area. From October, the charity will also be collecting Christmas gifts for service users, women and their children. The team are appealing for volunteers to help sort through the donations.