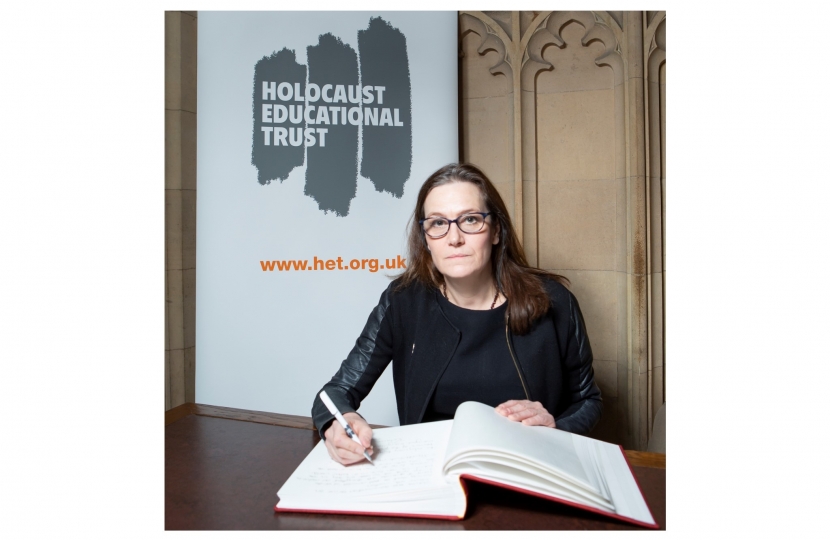 Today, Rebecca Harris signed the Holocaust Educational Trust’s Book of Commitment, in doing so pledging her commitment to Holocaust Memorial Day and honouring those who were murdered during the Holocaust as well as paying tribute to the extraordinary Holocaust survivors who work tirelessly to educate young people today.

On the 27th January each year, Holocaust Memorial Day is an incredibly important moment to commemorate the 6 million Jews killed in the Holocaust alongside other large numbers murdered in subsequent genocides in Cambodia, Rwanda, Bosnia, and Darfur. This date is significant as it marks the anniversary of the liberation of the largest Nazi death camp; Auschwitz-Birkenau. Holocaust Memorial Day also allows us to pay tribute to the extraordinary Holocaust survivors who work tirelessly to educate young people today.

“Today we commemorate Holocaust Memorial Day, as we keep alive the memory of all those lost to the evil that was the Nazi genocide of the Jewish people.  This year we are marking 77 years since the liberation of the concentration camps of Europe and the end of the Second World War.

Holocaust Memorial Day is an important opportunity to remind and warn people of what the worst of humanity is capable of. As always, I would encourage my constituents in Castle Point and all aspects of society to reflect on humanities darkest times and to show their support for such an important day.”

Holocaust Memorial Day is an opportunity to focus on the horrors of what can happen when equality and tolerance is side-lined and how much can be achieved by promoting respect and tolerance for all in our society. We must guarantee the lessons of the Holocaust are learned by educating our next generations accordingly, and enshrining equality in society. Thousands of commemorative events will be arranged by schools, faith groups and community organisations across the country, remembering all the victims of the Holocaust and subsequent genocides. The theme for this year’s commemorations is ‘One Day’.

As we move further away in time from the events of the Holocaust, it is more important than ever to remind and warn people of what the worst of humanity is capable of. We can never forget the horror of the Holocaust and will continue to stamp out anti-Semitism wherever it rears its poisonous head, as well as educating future generations so it can never be repeated.

Yesterday, the Government announced new measures to acknowledge and eradicate antisemitic abuse on university campuses in the England to protect Jewish students and staff.

Antisemitism has no place in our society or any of our world leading universities, so we must work hard to ensure that no staff member or student is subjected to such abhorrent abuse. That is why the Government is committing to working hand-in-hand with education providers, vice chancellors and Jewish groups to improve data reporting, build a better picture of the issue and improve support for Jewish students to ensure universities have the right tools to tackle this issue.

The Education Secretary hosted an antisemitism summit with vice chancellors, university reps, sector leaders such as Universities UK and the National Union of Students and Jewish rights groups yesterday. The antisemitism summit looked at the incidents of antisemitism on campus and discuss measures and commitments that can be taken to ensure Jewish students and staff feel safe in higher education. This could include working with the Community Security Trust (CST) to improve data reporting from universities to help build a better picture of this issue and sharing cases of best practice. Alongside these discussions, the Union of Jewish Students (UJS) ran training workshop for attendees about how to improve support for Jewish students who have been victims of antisemitism.

The summit builds upon the Department for Education’s ongoing commitment to work with Higher Education providers in England to acknowledge and eradicate antisemitism. For any more information on the antisemitism summit, including comments from the Education Secretary and the number of potential actions those in attendance discussed to help tackle antisemitism, please visit: https://www.gov.uk/government/news/education-secretary-leads-call-to-tackle-antisemitic-abuse-on-campuses--2.

Education is a vaccine against antisemitism – we are clear that antisemitism, like all forms of racism, will never be tolerated in our classrooms or campuses and we will continue to work to protect people from facing this abuse.