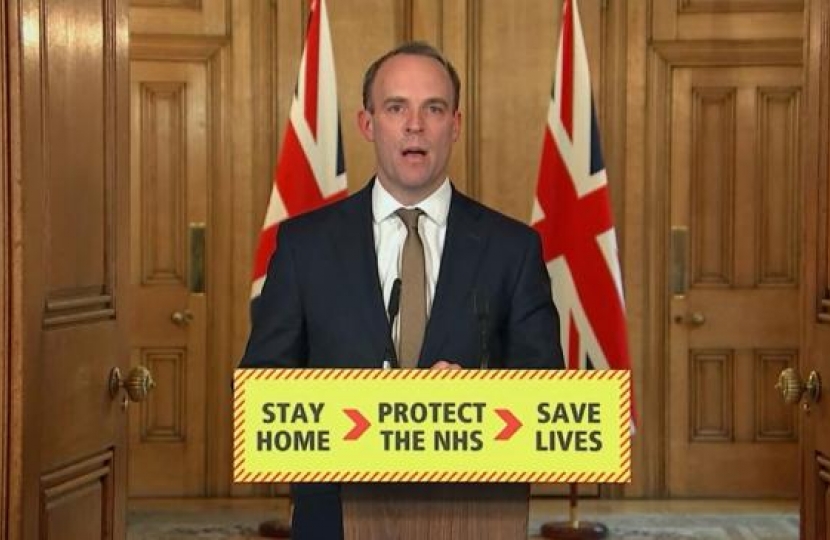 KEEP UPDATE WITH THE LASTEST: https://www.gov.uk/guidance/travel-advice-novel-coronavirus

"I just want to give you an update on the steps that we as a government are taking to defeat coronavirus.

Our step-by-step action plan is aiming to slow the spread of the virus, so fewer people need hospital treatment at any one time, thereby protecting the NHS’ capacity. At each point we have been following the scientific and medical advice and we’ve been very deliberate in our actions - taking the right steps at the right moment.

We are also taking unprecedented action to increase NHS capacity by dramatically expanding the numbers of beds, key staff, life-saving equipment on the frontline so that we give people the care they need when they need it most.

That’s why we are instructing people to stay at home, so we can protect our NHS and save lives.

I can report that through the government’s ongoing monitoring and testing programme, as of today:

Of those who have contracted the virus, 1,408 have, very sadly, died. We express our deepest condolences to the families and friends of those who have passed away and I think those figures are a powerful reminder to us all of the importance of following the government’s guidelines.

We must stay at home to protect our NHS and save lives.

I would like to thank all those involved on the frontline and in particular all of those in the NHS for their battle against the virus, the amazing doctors, the amazing nurses and all the support staff working day and night.

The thousands of other key workers – from our teachers to supermarket workers to our fantastic diplomatic network – who are all as a team working around the clock to get us through this unprecedented coronavirus challenge.

This is a united national effort and the spirit of selflessness shown by so many is an inspiration.

I now want to turn to what we’ve been doing to support British people travelling around the world.

Coronavirus hasn’t just challenged us at home, it is the greatest global challenge in a generation. And as countries work to secure their borders and stop the further spread of this deadly virus, we appreciate that an unprecedented number of UK travellers are trying to get home, and we’re not talking a few hundred or even a few thousand. We’re talking about hundreds of thousands of people travelling around the world.

So with that in mind, on 17 March, we advised people against all non-essential travel around the world.

And since 23 March, we have advised that all UK residents who were currently travelling abroad should return home. Hundreds of thousands have already done so.

But many travellers haven’t yet managed to get home. From young back-packers to retired couples on cruises. We appreciate the difficult predicament that they find themselves in.

We also recognise the anxiety of families here in the UK, who are concerned to get their loved ones home. It is a worrying time for all those who have been affected.

And I want to reassure them that this government, their government is working around the clock to support, advise and help British travellers get home.

I have spoken to more than 20 foreign ministers around the world in the last week or so to support this effort, to keep airports and ports open, and to facilitate access to them by British travellers.

Over the weekend, I spoke to foreign ministers from Australia, New Zealand, India and Brazil and Pakistan, and I also spoke to the Ethiopian Prime Minister, and in all of those cases urged them to work with us and keep commercial routes flying.

Given the scale and the complexity of this challenge, it inevitably requires a team effort. So the Foreign Office is working with other governments, and there is a particular focus on transit hubs, and we’re also working with the airlines to keep as many flights running as possible.

We have a lot more to do, but we have already helped hundreds of thousands of Britons get home.

The first priority has been to keep as many commercial flights running as we can, and that’s based on just purely the scale and the number of people who want to come home.

That gives you a sense of the scale of the challenge and the numbers of British travellers abroad.

Now in circumstances where commercial flights can’t operate, we have already chartered flights, which proved necessary to return 1,400 UK nationals on flights, for example, from China at the outset of this crisis and more recently from Peru.

We’ve not faced challenges in getting people home from abroad, on this scale, in recent memory. Airports are closing down or preventing airlines from operating on a commercial basis. Local authorities have placed restrictions on movement that prevent people from getting to the airport. And the critical transit hubs that we rely on for long-haul flights are also shutting down, or in some cases, limiting their flights.

Some of these restrictions have been done with very little notice, some with no notice at all which makes it very difficult to respond. So, international collaboration is absolutely vital.

As I said, it is a team effort, in it involves government working with other governments and also with the airlines.

So with that in mind, I can today announce a new arrangement between the government and airlines to fly home tens of thousands of stranded British travellers, where commercial flights are no longer possible. Partner airlines include British Airways, Virgin, Easyjet, Jet2 and Titan, and this list can be expanded.

Under the arrangements that we are putting in place, we will target flights from a range of priority countries, starting this week.

Let me explain a little bit about how this will work in practise.

Where commercial routes remain an option, airlines will be responsible for getting passengers home. That means offering alternative flights at little to no cost where routes have been cancelled. And it means allowing passengers to change tickets, including between carriers.

So for those still in those in countries where commercial options are still available, don’t wait. Don’t run the risk of getting stranded. The airlines are standing by to help you. Please book your tickets as soon as possible.

British travellers who want a seat on those flight will book and pay directly through a dedicated travel management company.

We designated £75 million to support those flights and airlines to keep costs down and affordable for those seeking to return to the UK.

In arranging these flights, our priority will be the most vulnerable, including the elderly or those with particularly pressing medical needs, and also looking in particular at countries where large numbers of UK tourists struggling to get home.

UK travellers, if they haven’t already done so, should check Foreign Office Travel Advice and that advice is under constant review, and it can help travellers to find out more details of how to access the flights under this arrangement.

They should also follow the social media of the UK embassy or high commission in the country where they find themselves, so that they can be directed to accurate real time information, including from the local authorities.

For any questions that can’t be answered in that travel advice, or by the UK Embassies or High Commission, we also have our call centre working 24 hours a day, 7 days a week.

I know that it has been difficult for some travellers to get through. Just to give you a sense of volume: on average, we normally receive 1,000 calls a day to that call centre. Last Tuesday, we had nearly 15,000 – the highest on record.

So we’ve boosted our resources, we’ve redeployed people to assist in the call centre and we’ve tripled our capacity.

Yesterday, the call centre answered 99% of calls, and helped thousands of British travellers to get the answers they need.

So, for those stranded, or for families nervously waiting news and wanting to see their loved ones return home, we are doing everything we can. We have improved our advice and boosted the call centre, so travellers get better and swifter information.

We have put in place this arrangement with the airlines so that we can reach British citizens in vulnerable circumstances abroad where commercial flights aren’t running. And we’re working intensively round the clock with all of our partner countries and governments around the world to keep open the airports, the ports and the flights to bring people home.

We’ve not faced an international challenge quite like this before, but together we are going to rise to it.

And, of course here at home, we can all support our NHS by continuing to follow the guidance to:

Today the Health Secretary will announce the UK’s expertise will be offered to other countries around the world to help them to identify new variants of COVID-19 – enabling them to identify changes in the virus and providing an early warning system for new mutations that could endanger the UK.