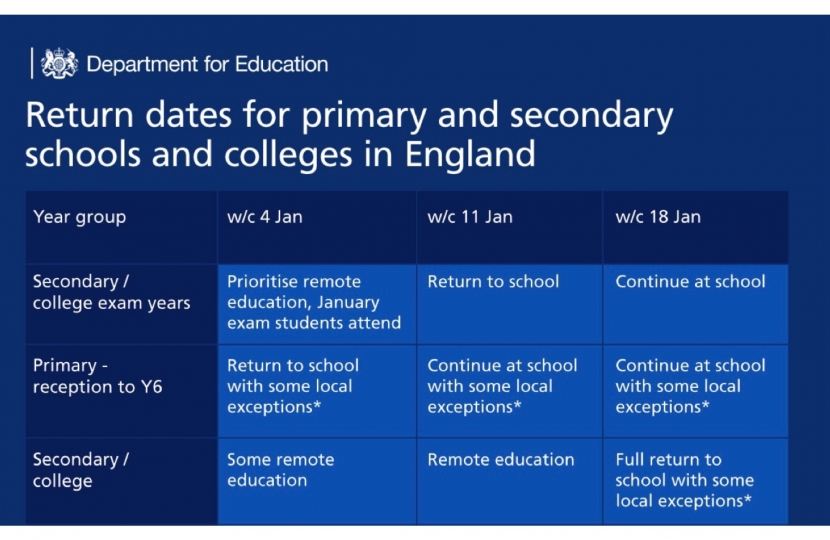 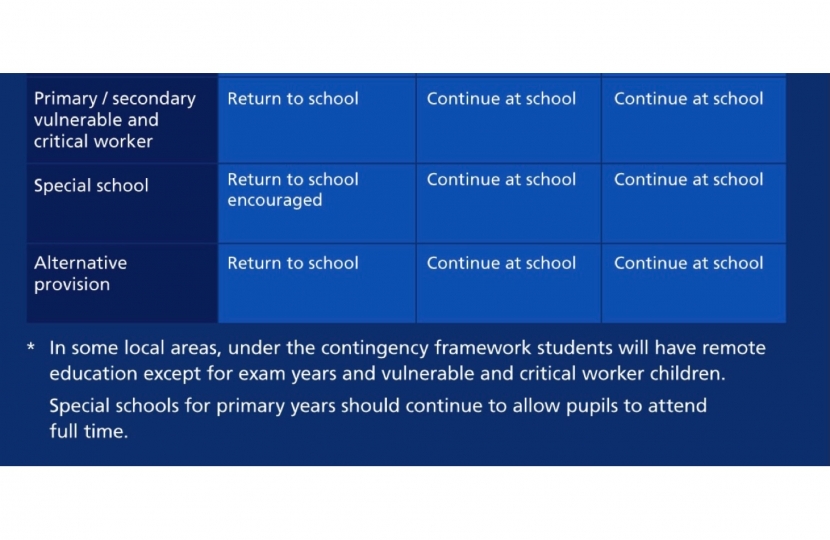 *** THIS INFORMATION HAS NOW CHANGED GIVEN THE LOCKDOWN***

The Government have strengthened the plan to keep early years settings, schools, colleges and universities open for face-to-face teaching from January. The Government are continuing to do everything in our power to ensure education and childcare settings are as safe as possible.

I am a firm believer that face to face teaching is the best form of education and our schools are the best place to provide this in a controlled and safe environment. However, whilst the Government’s main priority is to guard children’s education, it must not be at the risk of their health. It is vital that schools are a safe environment.

Therefore, in order to help contain the community transmission of coronavirus, the Government has introduced restrictions to primary education settings in the worst affected areas – applying a contingency framework. In response to significantly rising cases across Essex and growing demands on hospitals and health and social care services, particularly Mid, South and West Essex due to coronavirus, primary schools in the districts most acutely affected will also be facing a delayed return to face-to-face learning of two weeks until 18 January. Our constituency of Castle Point will fall into the list of local authorities where the contingency framework applies.

Essex County Council has written to Essex schools, confirming arrangements from January. The decision will be reviewed by the Government by 18 January. Infection rates will continue to be monitored throughout January and any further updates will be clearly communicated with parents and carers going forward.

It is also important to note that in all settings, schools will remain open for face to face teaching for vulnerable children and those of critical workers from 4 January. Exam-year pupils primarily in Years 11 and 13 are set to return to school the following week on 11 January.

Below I have included the Governments plan for student’s return to education in the New Year:

Early years and childcare will remain open as normal, including in contingency framework areas.

The majority of primary schools will return as usual in the first week of January. In addition, in areas of the country with extremely high rates of incidence or transmission of the virus, the Government has taken the decision to invoke the Contingency Framework for Education for primary schools.

The Government work closely with PHE, the NHS, with DHSC to monitor the number of new infections, positivity rates, and pressures on the NHS. Decisions have been made by Ministers on this basis whilst balancing a desire to keep as many children as possible in school. The contingency framework has been applied to address local areas with high rates of infection and with significant increases in 7-day case rates, and pressure on the NHS. The areas affected are listed in annex A and can be found here:

In these areas primary schools move to remote education, except for vulnerable children and children of critical workers who continue to attend. The Government will keep these areas under regular review, taking steps to return to face-to-face education for all as soon as possible.

The Government previously announced that schools would stagger the start of term for secondary school pupils and college students with a full return from 11 January to allow for a programme of rapid testing for staff, pupils and students.

However, in light of early evidence suggesting older children may be transmitting the new strain of the virus at the same rate as adults, the Government are now further staggering the full return to secondary schools and colleges until 18 January. This will allow more time for secondary schools and colleges to prepare for the roll out of the rapid testing programme, making the full return as safe as possible. There is no evidence the new strain of the virus causes more serious illness in either children or adults.

Vulnerable children and the children of critical workers in secondary schools and colleges will be provided with face-to-face education as normal from 4 January.

The staggered return for secondary schools and colleges will proceed as follows:

The contingency framework will also apply to secondary schools; and areas will be kept under review.

All children and young people can return to face-to-face education in special schools and special post 16 settings from 4 January. Special schools and colleges are being offered greater flexibility on face-to-face attendance of secondary-aged pupils/students in the first week of term to enable them to appropriately mobilise the mass testing programme. All children and young people will return to alternative provision settings from 4 January.

In Universities, students doing medical, clinical and healthcare related subjects, including nursing, social care, dentistry and veterinary studies can return as planned, along with those on teacher training courses. All other students should access learning online and remain at their vacation address wherever possible. Plans for the return of remaining students will be kept under review, with the first review point to take place in the week of 18 January. Minister Donelan’s letter to university vice chancellors is available here: https://www.gov.uk/government/publications/letter-from-michelle-donelan-to-higher-education-providers.

The Government are establishing an ambitious testing programme, first by testing as many secondary school and college students as possible in the new year and thereafter by setting up regular, ongoing rapid testing in schools and colleges. This will be critical in helping to break chains of transmission and reducing the need for self-isolation where students and staff test negative for the virus.

The Government now expect all secondary schools and colleges to take up the offer of rapid testing for all students in January. Two rapid tests will be available to all students as a means of identifying asymptomatic cases and to help break chains of transmission. Proof of a negative test will not be required for students to return to face-to-face teaching on 18 January.

Weekly testing will be available to staff and daily testing of all staff and students that have been a close contact of a confirmed case, reducing the need for self-isolation, should also be put in place. Testing for primary school staff under both the weekly and daily testing programmes will follow in the second half of January.

Parents whose children are eligible to return on the 4 January in very high risk areas, are encouraged to access a PCR test from the Government website as their main testing route. Lateral flow testing centres are also open in Brentwood, Pitsea and Basildon, with more centres planned for opening across the county throughout January.

To support schools and colleges in managing remote education during this time, the Government expect to deliver over 100,000 devices to schools across the country in the first week of term. So far, the Government have already delivered a total of 560,000 devices with a target of one million to be delivered to the children who need them most.

The Government’s direction to schools to provide remote education to a similar threshold as class-based learning was issued last term and we have provided support for online resources, including £4.84 million to Oak National Academy, which has, so far, seen over 8 million lessons viewed. The device programme will also be extended to cover 16-19-year olds in schools and colleges.

These measures will help to reassure students, parents and teachers about returning to school and college, minimising disruption during the spring term, and helping to identify positive cases.

Going to school, college and university

Over 6.8 MILLION Vaccines have been Administered so far Across the United Kingdom

The NHS are leading the global fightback against coronavirus with our vaccine programme. On 23 January, a record 491,970 people received their first dose of the vaccine.