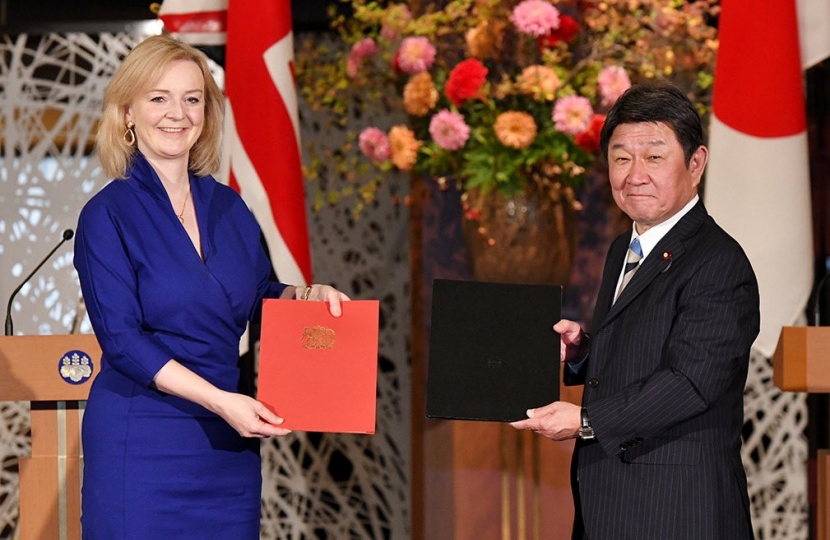 The British-shaped deal is the first agreement that the UK has secured that goes beyond the existing EU deal, with enhancements in areas such as food and drink, creative industries, digital and data.

Last year over 1,000 East of England businesses exported goods to Japan with annual goods exports worth £870 million. This deal secures major wins that would be impossible as part of the EU and brings together two of the world’s most technologically advanced nations, placing the UK at the forefront of shaping new global standards on digital trade.

“Today is a landmark moment for Britain. It shows what we can do as an independent trading nation, as we secure modern and bespoke provisions in areas like tech and services that are critical to the future of our country and the reshaping of our economy.

“Trade is a powerful way to deliver the things people really care about. At its heart, this deal is about creating opportunity and prosperity for all parts of our United Kingdom and driving the economic growth we need to overcome the challenges of coronavirus.

“The agreement also has a much wider strategic significance. It opens a clear pathway to membership of the Trans-Pacific Partnership – which will open new opportunities for British business and boost our economic security – and strengthens ties with a like-minded democracy, key ally and major investor in Britain.”

The food and drink manufacturing sector employed 36,000 people across the East of England in 2018. Last year, the value of food and drink exports to Japan was worth £311.5 million and agreed liberal Rules of Origin (ROO) terms will allow exporters to source ingredients from the EU and rest of the world.

Customs costs and procedures for UK exporters will be more straightforward and the deal makes it simpler for UK businesses to meet Japanese safety regulations for manufactured products including human medicines.

Award-winning medical engineering company, Seers Medical has been exporting its medical treatment tables to Japan for a decade and offers a lifetime frame warranty on its products with accredited electrical and mechanical safety guarantees.

Founded in 2008 and based in Debenham, Suffolk, the business has 55 employees and exports to 90 countries. Seers Medical receives around three orders a month from Japan, especially for its physiotherapy couches, and manufactures all products in the UK using hi-tech machinery.

UK exports to Japan have been growing by an average of 8.2% year-on-year over the previous five years and this free trade deal will provide additional opportunities, with potential benefits including higher wages, and lower prices for all parts of the UK.

This UK-Japan deal makes it easier for small and medium-sized enterprises (SMEs) to trade with one of the world’s largest economies and could grow UK-Japan trade by £15.7 billion, giving a £1.5 billion boost to the UK economy and increase UK workers’ wages by £800 million in the long run.

The removal of several trade barriers aims to assist the UK's 8,000 SMEs already exporting goods to Japan, by offering tariff-free trade on 99% of UK exports to the country in the long term.

Other key benefits of CEPA include:

The UK stands firm in trade negotiations to ensure any future trade deals protect our NHS and maintain all existing protections for our high standards of food safety and animal welfare.

Once signed, the final agreement text will then be laid in Parliament for 21 sitting days for scrutiny under the Constitutional Reform and Governance (CRaG) Act.

A full parliamentary report will also be published on the agreement, providing an explanation of the CEPA, including any significant differences or enhancements between the UK-Japan CEPA and the EU-Japan Agreement.