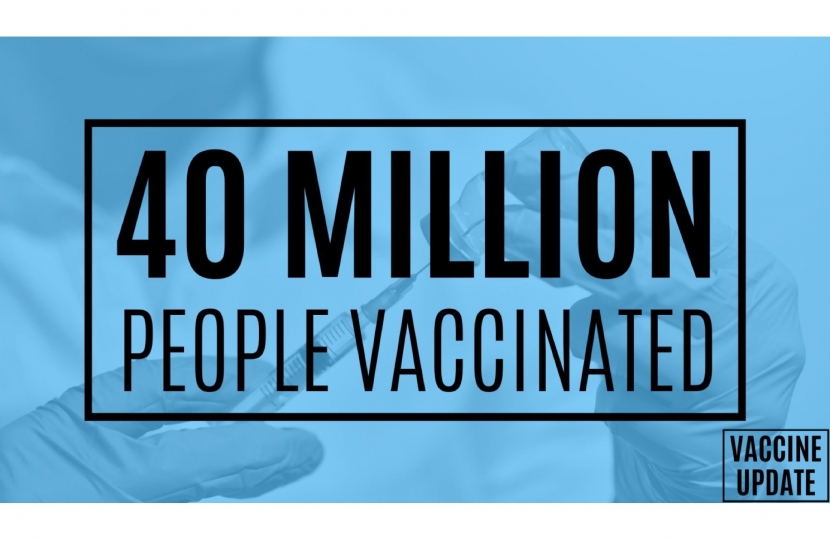 More than 75% of adults across the UK have received their first dose, while over half of all adults have now received their second dose. With everyone aged 30 or over being offered a vaccine, the Government remains on track to meet its target of offering every adult a vaccine by the end of July.

99,038 total vaccines have been administered in Castle Point to date, including 39,948 people who are now fully vaccinated with a second dose – giving them the maximum possible protection against the virus.

To give those most at risk the greatest protection possible, the Government is accelerating the delivery of second doses by reducing the period between the two courses from twelve weeks to eight and will launch a booster programme in the autumn - backed by 60 million doses of the Pfizer vaccine.

In just under six months since the world’s first approved vaccine, the Pfizer vaccine, was administered in the UK, Britain’s vaccination programme is already having a significant impact in reducing hospitalisations and deaths, saving more than 13,200 lives in England alone.

Thanks to efforts of the Vaccine Taskforce, we have secured more than 500 million vaccines for every nation of the UK, including over 210 million doses of the Pfizer, Oxford-Astrazenca and Moderna vaccines which are currently being deployed in the fight against the virus.

None of this could have happened without the remarkable and heroic efforts of our NHS, our key workers, our armed forces and communities and volunteers across the country, who are working together to deliver the vaccine and save lives.

“Thanks to the continued success of our vaccine programme, and the efforts of people in Castle Point and around the country, we are making huge progress in emerging from this pandemic.

“Vaccines remain our best defence against the virus, and the case for getting vaccinated has never been clearer, which is why I am encouraging everyone when they get invited forward, to get the jab.”

For more information on the COVID-19 vaccination programme, including comments from the Health and Social Care Secretary and the Vaccines Minister, please visit: https://www.gov.uk/government/news/over-40-million-people-receive-first-dose-of-covid-19-vaccine-in-uk.

Rebecca Harris MP is urging constituents to take a coronavirus test before returning to school next week following the half term break.

As part of the Conservative Government’s efforts to step up testing as we recover from the pandemic, a major testing programme has been established for students since schools returned in March to identify asymptomatic cases and isolate them as quickly as possible, helping to keep schools open in Castle Point.

The success of students and staff in building regular twice-weekly testing into routines is testament to their dedication to keeping the virus out of schools and colleges.

Regular rapid testing is key to finding the one in three people with COVID-19 who show no symptoms, allowing them to isolate rather than unknowingly spread the virus and preventing outbreaks from taking hold.

Secondary schools and colleges across Castle Point are continuing to provide packs of tests to their students so they can take two tests a week, with more than 57 million already distributed and many more on the way. Primary schools are also providing packs to their staff.

Everyone is encouraged to test twice a week, with one of the two tests at the weekend to catch cases before they return to school on Monday. These are available from pharmacies in Castle Point and other sites. Testing before returning to school after the half-term break will be particularly important after mixing with different groups over the break.

Positive cases identified by rapid testing are confirmed with a PCR test, meaning nobody has to worry about isolating unnecessarily following a positive rapid test result.

“I urge all children and families in Castle Point to test themselves on Sunday night ahead of schools returning, and then twice weekly to keep their friends and families safe.

“Rapid tests are available to everyone free of charge and by using them regularly, you can find cases of infection that wouldn’t otherwise be found and help stop the infection spreading.

“One in three people with Covid-19 have no symptoms so can go under the radar without testing. We can all do our bit to keep our schools and communities safe as school starts again.”

For more information on the Government’s major testing drive ahead of the return to schools, please visit: https://www.gov.uk/government/news/major-testing-drive-ahead-of-return-to-schools-next-week.

Today, the Government has announced partnerships with leading dating apps to encourage users to get vaccinated – providing another asset to our historic vaccination program that has already saved thousands of lives.

The vaccine is our way out of this pandemic and we have made incredible progress so far with over three quarters of adults receiving at least one dose. And to encourage uptake further – the Government is partnering with leading dating apps to boost vaccine uptake among young people – encouraging users to show their support for the vaccine on their dating profiles and give in-app bonuses to those who say they are vaccinated.

Leading dating brands including Tinder, Match, Hinge, Bumble, Badoo, Plenty of Fish, OurTime and Muzmatch have teamed up with the Government to encourage their users to get COVID-19 vaccinations through a new campaign.

From today, the country’s leading dating brands will add new features to their apps and websites to support the Government’s ‘every vaccination gives us hope’ campaign. The campaign encourages younger people to get their vaccine in the second phase of the rollout, and join the millions who have already received their jabs.

The new features will allow users to show their support for the vaccine on their dating profiles and give in-app bonuses to those who say they are vaccinated. Features will include vaccination badges and stickers to display on dating profiles, free ‘super likes’ and other boost-type features.

The case for getting vaccinated is clear, which is why the Government is encouraging everyone, when you get the call, get the jab, so together we can keep ourselves and our loved ones safe.

For more information on the Government’s partnership with leading dating apps to boost vaccine uptake, including examples of vaccine promotion campaigns launching across dating platforms in the UK, please visit: https://www.gov.uk/government/news/leading-dating-apps-partner-with-government-to-boost-vaccine-uptake.