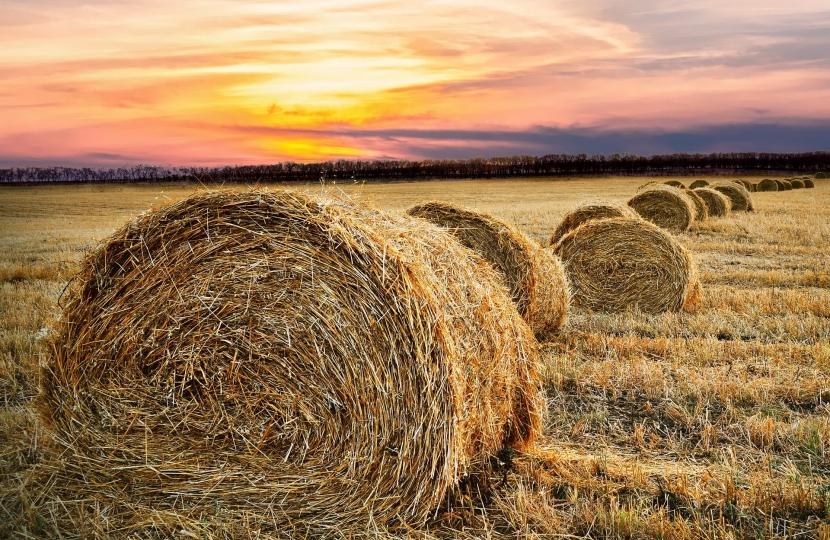 The Agriculture Bill 2019-21 (originally HC Bill 7) was published on 16 January 2020. The Bill has passed through both the House of Commons and the House of Lords.

Why is the Bill needed?

What else does this Bill do?

The recent votes in the Agricultural Bill, have yet again produced misleading headlines suggesting the Government will be compromising on our food standards after we leave the EU. This is not the case.

The EU Withdrawal Act transfers all existing EU food safety provisions, including existing import requirements which prohibit the chlorine-washing of chicken carcases, onto the UK statute book. This means all food coming into this country will be required to meet existing import requirements.  The vote on the Agricultural Bill DID NOT change this.  Any changes to existing food safety legislation would require new legislation to be brought before this Parliament.

The Lords Amendments would potentially create a vast set of conditions applicable to imports under trade agreements that do not apply under any agreement the UK or EU has today.  There were several proposed amendments, including on one to make it a “Requirement for agricultural and food imports to meet domestic standards”, which in theory sounds entirely reasonable, however there would be a number of unforeseen consequences:

Like all the other countries in the EU, the UK currently operates trade on the grounds of adherence to sanitary and phytosanitary (SPS) requirements only. We do not require countries we trade with to follow UK domestic regulation on HOW food is produced, including in preferential trade agreements like CETA with Canada. Nowhere else around the world do existing trade agreements include a requirement for partner countries to produce to another country’s domestic regulations and standards.  Insisting on UK domestic regulations being applied to the production of food, and not just on the SPS standards of what we allow to be imported, would be an unprecedented barrier to trade that doesn’t currently exist.  It would also damage developing nations where access to UK markets is key to lifting millions out of extreme poverty.

For example, right now we import bananas (which we obviously cannot grow in the UK) from many countries including the Dominican Republic, Belize and Cameroon under existing EU rules. This amendment would require all these countries to have processes in place to show that they meet thousands of pages of UK domestic environmental and animal welfare legislation. The cost would be prohibitive & unnecessary and if the amendment was passed, pretty much all food imports would be banned from pretty much all developing countries if we signed a trade deal with them.

This amendment could have affected whisky exports to Canada, worth £96 million and potato exports to Egypt, worth £30 million. I voted against this amendment as it is protectionist in nature, it doesn’t open up the ability to trade freely – one of the greatest reason’s that I backed Brexit was for the opportunity to broker new trade deals, not to become a protectionist state.

In all our trade negotiations, we will not compromise on our high environmental protection, animal welfare and food standards. We already have the robust processes, bodies and systems in place to protect our standards. The Government are not planning to negotiate trade deals that harm farmers and consumers.

Does this mean chlorine-washed chicken and hormone-fed beef are going to be imported into the UK now?

No. The EU Withdrawal Act transfers all existing EU food safety provisions onto the UK statute book. This includes current import requirements, which for example ban the use of artificial growth hormones in domestic and imported products and prohibit the chlorine-washing of chicken carcases.

The Government will stand firm in trade negotiations to ensure any deals live up to the values of our farmers and consumers. Any changes to these standards would have to come before Parliament.

Moreover, the UK will maintain a strong institutional framework for upholding the quality and safety of the food we import and consume through a range of Government departments, agencies and bodies such as the Food Standards Agency, Food Standards Scotland, the Animal and Plant Health Agency, the Veterinary Medicines Directorate and the Health and Safety Executive.

What is the Trade and Agriculture Commission?

The Commission will ensure close engagement with the agriculture industry to help inform, shape and guide agricultural trade policy. It will be independently chaired by food safety expert Tim Smith, a former Chief Executive of the Food Standards Agency. Within a fixed term the Commission will consider trade policies that the Government should adopt to secure opportunities for UK farmers, producers and exporters.

The Trade and Agriculture Commission will also ensure the agriculture sector remains competitive and that animal welfare and environmental standards in food production are not undermined. When its work is concluded the Commission will produce a report, which will be presented to Parliament by the Department for International Trade.

The Trade and Agriculture Commission’s work is already underway. The Commission is open to evidence and input from any organisation or individual and will be guided by its members and working group participants. The Trade and Agriculture Commission is fully free to consider and make recommendations on any of the issues laid out (in the Lords Amendment Number 18) including on the need for other groups, trade policy measures or duties on Government relating to the examination of trade agreements. It is already working on these issues.

What the Government doing to tackle climate change? / Why was Amendment 17 not supported?

The UK has taken a world-leading role in tackling climate change and the transition to Clean Growth, with the UK being the first country to legislate to eliminate our contribution to climate change by 2050, and the fastest in the G20 to cut emissions.

When we achieve net zero, the UK will have eliminated its contribution to climate change, which as of December 2019 accounted for 1.2% of global emissions. Many other countries will hopefully follow our ambition, particularly those with a larger share of global emissions, such as China which accounted for 30%. Since 1990 the UK economy has grown by 75% while cutting emissions by 43%

Amendment 17 would create the requirement to have regard for climate change agreements, setting a no greenhouse gas reduction target for the agriculture sector. Unnecessary as the Secretary of State is already required to have due regard to the Government’s commitment to achieving net zero as set out in the legally binding 2008 Climate Change Act, and in reference to the Paris Agreement on Climate Change. Also, by not having sector-specific targets ensures that we can meet our climate change commitments in the most cost-effective way across the economy, maximising social and environmental benefits, and mitigating damaging trade-offs.

Furthermore, the Government has already invested £640m for tree planting and peatland restoration, over £1bn to support the transition to electric vehicles, at least doubling funding for energy innovation, and tax measures to reduce plastic waste, among other measures.

What the is Government doing to promote health and tackle child obesity?

The Government is also committed to tackling childhood obesity. The NHS Long Term Plan (LTP) seeks to tackle the problem of obesity head on. It contains new measures to improve wellbeing, underpinned by a focus on prevention rather than cure. As part of the Government’s ‘All Our Health’ initiative, nutrition training and an understanding of what is involved in achieving and maintaining a healthy weight, will have a much greater place in training for medical professionals, empowering doctors to help patients manage their diet and weight, and reduce childhood obesity.

The Government has also introduced multiple new measures in our new obesity strategy to get the nation fit and healthy to protect themselves against COVID-19 and protect the NHS. The range of measures include:

Our manifesto is clear that in all of our trade negotiations, we will not compromise on our high environmental protection, animal welfare and food standards. The Government are not planning to negotiate trade deals that harm farmers and consumers. Suggesting otherwise is entirely misleading.